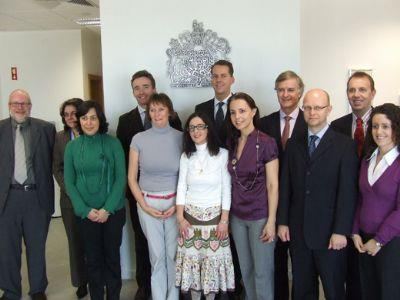 Tourism may be the biggest industry in the Algarve but there are numerous other British businesses across Portugal.

The world economic crisis has already affected numerous industries in Portugal and the British Embassy is aware that steps need to be taken to ensure the continuing success of British businesses currently in the country.

“There are going to be tough times ahead of us with the economic crisis, but we can help businesses, especially by putting them in contact with the authorities who can help them,” said Alex Ellis speaking at the British Consulate in Portimão on Thursday, February 19.

Richard Turner, Director for Trade and Investment at the British Embassy, told the Algarve Resident: “This is a difficult time for businesses but there is still plenty of potential in Portugal. The Embassy is actively working to stimulate British business in the Algarve and working to bring more companies to Portugal.”

Increased investment in Portugal by British companies is continuing despite the economic crisis, according to Richard Turner: “There is still interest in bringing products to Portugal. There has been no downturn in the last financial year. A lot of the best of British business is already here in Portugal and we are looking to bring more”

The department for trade and investment at the Embassy is optimistic about the future in Portugal and sees the Algarve, in particular, as a “natural market, with plenty of room to do business”.

The ongoing commitment of the Embassy to encourage and nurture new enterprises in Portugal was evident at the meeting as Richard Turner described how a delegation of six food industry representatives were currently in the Algarve to survey the market for their products to be brought here.

“There are representatives from frozen food suppliers to gluten free food specialists. There is clearly a market for their products here and we are helping them look at supermarkets and outlets for their products, especially in the Algarve,” said Richard Turner.

“The next year is not expected to be an easy year in business, however business is not done over just one year or one day and we need to be looking to the medium term,” he added.

British  Embassy and Consulate staff are preparing for the summer season and the influx of British tourists.

Ambassador to Portugal Alex Ellis was in the Algarve last week for the monthly board of management Embassy meeting. “We are always trying to improve customer service, with clearer, more efficient services for British residents and visitors to the region,” he said.

Paul Rodwell, British Consul, told the Algarve Resident: “We are currently looking to the summer season and are looking to proactive measures.  Already I have met with the GNR in Albufeira to talk about initiatives, especially in making people more aware of the possibility of crime.

“The GNR are looking to work with us to inform people to be more cautious and safeguard themselves against the possibility of property break-ins and we are looking to people who rent their properties in the summer to help us by informing clients about the potential risks and to make sure they lock doors and close windows to help themselves.”

However, fears that the Algarve has an elevated level of crime do not correlate with either figures gathered by the Embassy and Consulate or the reality of cases that they deal with.

“There are stories in the media about crime and people may well believe that the Algarve has become a more dangerous place to either live in or visit; this has not been our experience, although we are preparing ourselves for reactions to crime,” said Paul Rodwell.