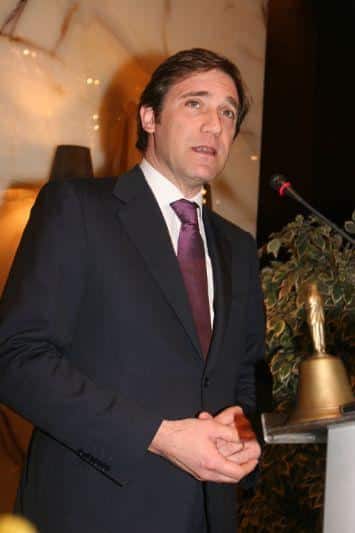 A PSD politician, widely tipped to one day be prime minister of Portugal, has issued stark warnings against excessive state intervention in the economy.

Parliamentary deputy Dr. Pedro Passos Coelho said at the American Club last Thursday that it was “not possible for the state to substitute the economy and control economic development” as had been done both by far right regimes and far left regimes in the 20th century.

While he admitted that the economic crisis demanded “exceptional measures including some state intervention in the economy,” he warned that the idea that the government could save all the companies in the country in trouble was “dangerous and unrealistic”.

“The state cannot substitute the economy,” he said. “This crisis might require more regulation but not a return to a planned, socialist economy.”

“Central intervention is wrong and trying to save companies at whatever the cost is not sustainable otherwise a government is faced with the impossible task of trying to explain why it saved some companies and not others,” he said.

He also warned that in Western countries generally and Portugal in particular, public debt had mushroomed, with the countries living beyond their financial means, while they were consuming more than the planet could endure. “We are getting into debt at a rhythm that is simply not sustainable.”

The politician said that if countries like Portugal continued to spend at the rate that it was doing, the future for younger generations would be mortgaged, citizens would become poorer and that no-one would lend the country more money.

“We have to save more and spend less if we are not to make the crisis worse than it is. I’m not trying to be pessimistic but we need to find our essential values again,” he said.

Pedro Passos Coelho also said that despite its failures and flaws there was “no better system than the democratic one.”

He warned those that believed the current financial crisis and recession were solely rooted in greed and exploitation, stating that these phenomena of human nature had existed before the capitalist system when the “vast majority of people lived in much worse conditions”.

Praising Barack Obama as a man for all seasons, one who held out hope to the world, he nevertheless warned about the perils of protectionism which left him “worried.”

“If Europe and the United States shut themselves away in a bubble we will all live worse off. I hope that in these times of crisis we will do the right thing,” he concluded.