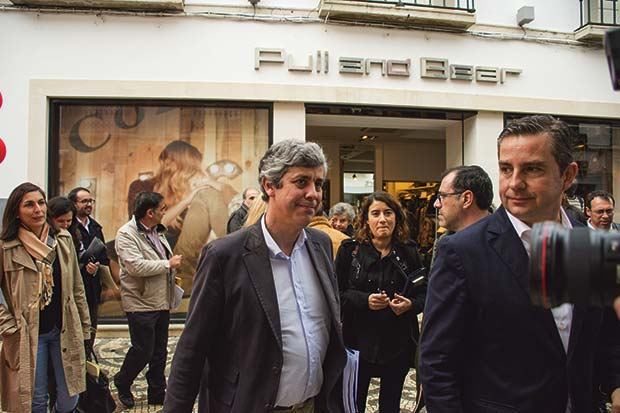 His ‘election’ has been mooted for months but, on Monday, in a secret ballot – the results of which were prematurely leaked – Portugal’s finance minister, Algarve born and bred Mário Centeno, was voted into what might be considered the European Union’s ‘top financial job’ – that of president of the Eurogroup.

It is a major ‘feather in the cap’ for Portugal at a time when Europe is at yet another turning point.

Of course there are those who will say it means very little – or worse, that it could mean that Centeno is suddenly under added pressure to toe the austerity line – but it is the first time that a southern (indebted) country has been given this level of responsibility and, as such, Centeno has the chance to fly Portugal’s flag as high as he possibly can.

Said President of the Republic Marcelo Rebelo de Sousa in interview with Spanish newspaper El País on Tuesday: “We are at a moment of movements in Europe: the ‘Brexit’, France with its new government of Macron; Germany without a government, Austria we just don’t know, Italy with elections on the horizon… In this set of transforming realities, the solution was to find a balance: Portugal.”

This is a country that is “open to dialogue, technically competent and politically flexible”, he said – “a bridge in all international decisions”.

Adept at sounding warnings without making them sound overly-presidential, Marcelo stressed to Portuguese reporters nonetheless that Centeno must “never forget that he is the finance minister of Portugal”.

It was as close to the Head of State indicating a stacked agenda than diplomacy could allow.

“Now, everything in life has a price,” he added, suggesting Centeno’s implies the diligent execution of the 2018 State Budget and a plan for 2019 that “corresponds to that which is demanded of someone who gives the example in the Eurogroup”.

Needless to say, there is little doubt that the 50-year-old economist knows precisely what lies ahead.

The last two years have seen his metamorphosis from what was dubbed “the Ugly Duckling” to “Super Mario” (as he started to pull this country out of recession) and finally to the “Ronaldo of Ecofin” – the star of Europe’s finance ministers as he navigated Portugal’s exit from the excessive deficit programme.

“When he took over the finance portfolio under Socialist prime minister António Costa in 2015, few had confidence he could achieve what was required – especially with two far left parties in government pushing for more spending,” recalls Reuters.

“Now, Portugal is set to grow this year at its fastest pace in at least a decade, the budget deficit will fall to its lowest level in modern times and the country has recovered an investment grade credit rating after years in junk territory.”

And Centeno has not achieved all this by bending to Brussels’ bidding. Despite the “Pepsodent smile” that one columnist here refers to (Reuters calls it “Portuguese charm”), he has tussled with doubters over his sums and predictions from the beginning – with warnings still in the air that the 2018 budget won’t deliver as planned. These came from European Commissioner for the Euro, Valdis Dombrovskis, who will undoubtedly be one of the real challenges of Centeno’s new job.

Congratulating Centeno in Portuguese (“Parabéns, amigo”), Dombrovskis tweeted: “A lot of work ahead of us: deepening EMU (the European Monetary Union) to start with completing Banking Union and setting up Capital Markets Union, successful completion of Greece’s programme and many other tasks.”

But before the glory-dust even started to settle, Dinheiro Vivo was delivering a rather sobering message from “a group of the world’s largest investors, including PIMCO and Black Rock”.

The bottom line of the letter addressed to Mário Centeno in his capacity of Minister of Finance in Portugal was that there is still much to do to restore investor confidence in Europe following the writing off of billions of euros worth of bonds in the collapse of BES.

Says DV, the letter suggests Centeno “will only have success as Eurogroup president if he first sorts out the problems in Portugal and asks that negotiations with regard to Novo Banco bonds transferred to the bad bank are resumed”.

As President Marcelo said on Monday: “Everything in life has a price.”

The Eurogroup’s current president Jeroen Dijsselbloem – the one who leaked Centeno’s election win ahead of the votes and then, with a smile, asked reporters to ignore it – will be stepping down on January 13.