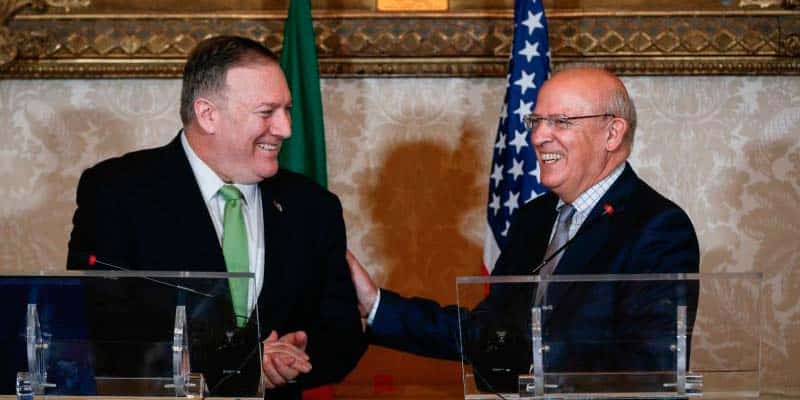 This was billed as the bottom line coming out of a meeting yesterday between senior Portuguese officials and the United States Secretary of State Mike Pompeo.

Said reports in the international press, “Portugal is the latest EU country to resist U.S. efforts to persuade allies they should shun bids by Huawei to provide the hardware that operations will use for new ultra-fast 5G networks”.

Comments made back in May included the contention that Chinese technology wasn’t even cutting edge (click here).

At yesterday’s meeting, Mike Pompeo returned to the central theme: that Chinese technology cannot be trusted.

He stressed European leaders have a responsibility to protect citizens from “malign actors”.

The Chinese government “won’t hesitate” to use Huawei as a back door to sensitive data, Pompeo warned.

But still Portugal ‘held fast’, repeating the mantra that “all foreign investment is welcome”.

The New York Times joined up the dots, explaining: “Portugal is one of the EU’s, and NATO’s, smaller members and keen to attract investors.

“Chinese companies already own significant assets in the energy, banking and insurance sectors in Portugal.

“Portugal has challenged critics of its China policy to compete with Beijing on Portuguese investments”.

Foreign affairs minister Augusto Santos Silva mentioned for example the public tender opening imminently for Europe’s largest container terminal in Sines. He said China is expected to table a strong bid, and “he hoped U.S. companies would compete too”.

The paper added that concern over the safety of Huawei technology is starting to ‘filter through’.

“There are signs that Europe is starting to take the U.S. concerns more seriously”, it said.

The Dutch government, for instance, has said that wireless companies “could ban equipment suppliers with connections to foreign governments or intelligence agencies involved in spying” – and British PM Boris Johnson “hinted at a tougher stance” at the UN summit in London on Wednesday, saying “he didn’t want to compromise security and intelligence cooperation in any decision on 5G suppliers”.

In other words, the smiles in the photograph above may be because the headlines coming out of the meeting don’t tell the full story.