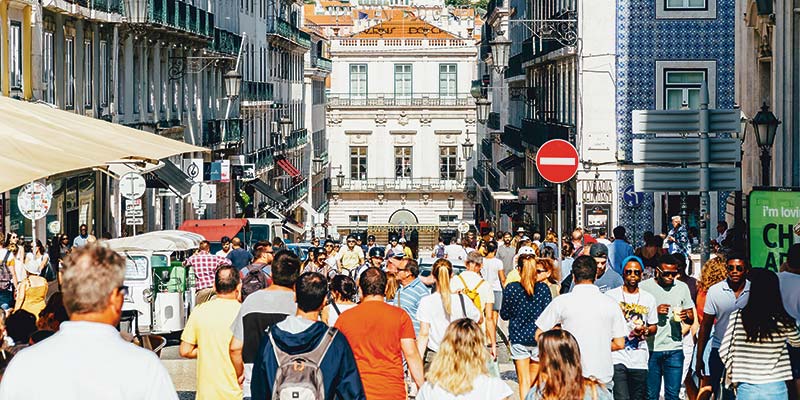 In what sets out to be an upbeat news story on how Lisbon “has become the most welcoming place for refugees” in an increasingly apathetic Europe, television news channel Aljazeera reported last Friday that “Portugal is in advanced talks with Germany about relocating thousands of people”.

This tiny country is “bucking the trend” across the continent, said the station’s journalist Laurence Lee, in that it “finds itself in a minority of one … actively trying to encourage refugees to come and settle here”.

The issue of ‘refugees fleeing Portugal’ is already well-documented. Ever since the mass-influx in 2015, there have been stories of people who simply disappeared overnight unimpressed with what they found here.

But Lee’s reference to talks at an advanced stage with Germany to relocate thousands seems to have come out of more or less nowhere.

Last summer, there was reference to an agreement between Portugal and Germany “on the possibility of voluntary relocation of people”. But it was all left suitably vague.

At the time, the two countries were discussing how to persuade refugees back to Portugal who had fled for Germany.

The numbers involved were small. “Around 200,” said reports – and it’s still unclear how many have indeed agreed to come back.

Germany’s problem with failed asylum seekers is also well-documented. The country has been desperately trying to deport hundreds of thousands of people for years.

Reporting from Berlin in January, the Telegraph said: “Public anger has been growing over repeated failures to deport migrants”, many of whom cannot be relocated “because they do not have the necessary paperwork”.

There is also the issue of where these people can go.

It is often not safe for them to return to their home countries, while the “rise of far-right politics in parts of Europe” has seen what Laurence Lee calls “a growing reluctance” among other member states to accept them.

Enter Portugal, where interior minister Eduardo Cabrita is filmed telling Lee that this country not only feels a “moral responsibility” to taking in refugees but sees their arrival here as a “social and economic opportunity”.

The question left hanging in the air, however, is what can Portugal possibly offer these people?

According to Lee’s report, it could encourage arrivals to open up restaurants and create a sense of community that, in turn, would staunch any thoughts of exodus.

Dabah feels “at home in Portugal”, he told Aljazeera. The climate is similar to that of Syria. “The people are welcoming.”

As Lee concludes: “Over the last five years, the countries in Europe with the loudest voices have been those claiming that refugees threaten the social fabric of the continent. Portugal’s voice is much quieter, but it offers a friendship that doesn’t exist elsewhere.”

Portugal’s problems with a rapidly ageing population could explain its decision to welcome what are effectively failed asylum seekers. Dwindling demographics may also be behind the recent announcement by secretary of state for the communities José Luís Carneiro that the government will be revealing a “vast set of measures” within the next few days designed to woo emigrés back home.

Study and Investigate in Portugal, new campaign
Kicking off in Luxembourg this week was perhaps the first of this vast set of measures – aimed at encouraging the children of emigrés to choose Portugal as the place in which to take their university courses.

Said José Luís Carneiro, Portuguese universities have 3,500 vacancies annually reserved for the children of nationals, but these are never fully taken up.

Last year, for example, only 247 places went to the sons and daughters of emigrés – and, incredibly, that was a 40% increase on figures for 2017.

João Queiroz, director general of higher education in Portugal, told reporters: “We have a high-grade network of universities with good teachers that could be (much more) taken advantage of by international students and those with Portuguese heritage.”

The initiative to reach out to the diaspora in Luxembourg is to be followed by further sessions in France, Germany, Switzerland and the United States – but the rest of the promised ‘vast set of measures’ has yet to transpire.

Remember, this is an election year – and all these soundbites make Portugal sound refreshingly proactive.

This could also explain why the story of a refugee on hunger strike in Miranda do Corvo hasn’t made it into any mainstream newspapers.

SIC television presented the story on Monday. It centres on a large family (two adults and four children) whose 18 months of refugee support-funding has run out, and who now does not have enough money to buy food.

It is not immediately clear who in the family is on hunger strike as the report simply showed a largely silent group of people sitting on a mattress – but the message is clear: Portugal may indeed ‘welcome’ refugees, but the extent of help available is limited and the bureaucracy involved frustrating.

SIC’s two-minute report on the Hannan family seems to have succeeded in getting father Ali a meeting with Social Security, scheduled for next Monday.