“Good morning everyone… It’s looking pretty hectic out there this morning”…This is how the Algarve’s go-to social media fire-watch site (Alerta Incéndio Florestal/ Forest Fire Alert) welcomed visitors today after a fire which broke out in the middle of the night near the University of the Algarve spread to Almancil’s borders.

Television crews raced to the scene, filming firefighters in the well-kept areas of Quinta do Lago – but as the day began this particular fire looked like being contained – in spite of high winds and blistering temperatures. 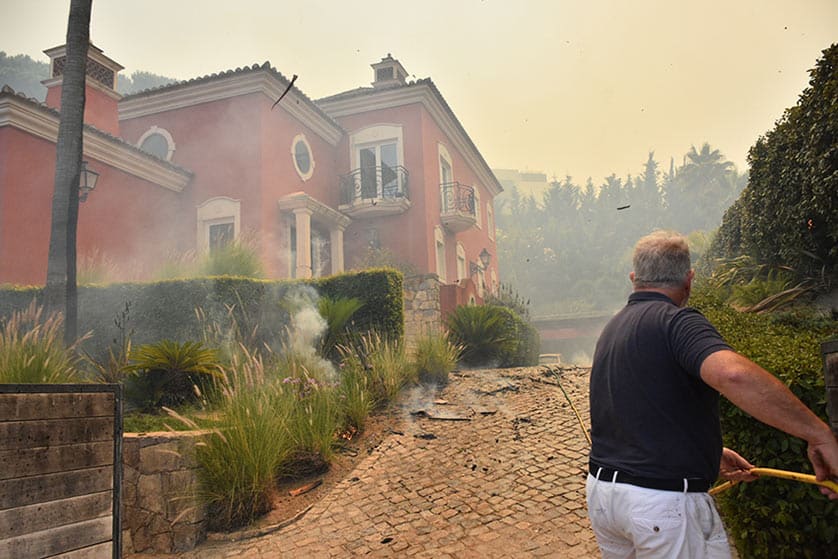 Various homes around the ETAR (water treatment plant) in Pinheiros Altos were being evacuated (“as a precaution”), but the presence of so many firefighters on the ground suggested the incident would not spiral much further out of control.

Nothing could have been further from the truth.

In the words of Open Media reporter on the ground Bruno Filipe Pires: “What I witnessed today was a tactical fire that targeted one of the most prestigious areas of the Algarve with the help of hot dry southeasterly gusts of wind. 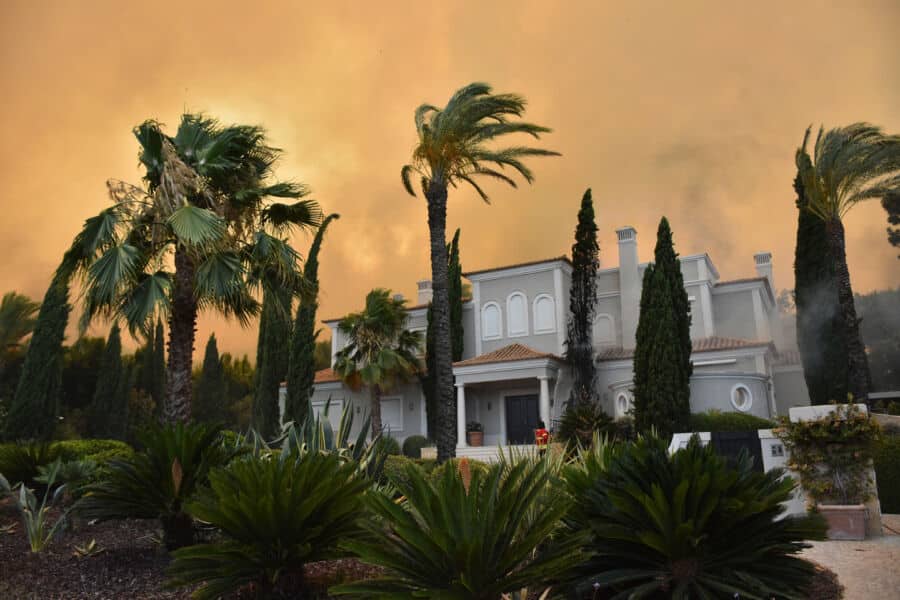 “A little after 10.30 this morning Richard Marques, operational district commander of Faro’s Civil Protection, in his briefing on the blaze that began last night in the Ludo areas of Gambelas, near Faro, warned journalists that firefighters would have a difficult day ahead of them, with a fire front stretching 8kms.

“Even so I do not think anyone could have predicted what ended up happening at lunchtime in Quinta do Lago.

“The flames powered into the golf course so quickly there was almost no time for gardeners and staff of Infraquinta to try and point irrigation outlets towards the blazing pine trees.

“In minutes everything was burning. Damages are incalculable. For all of us.” 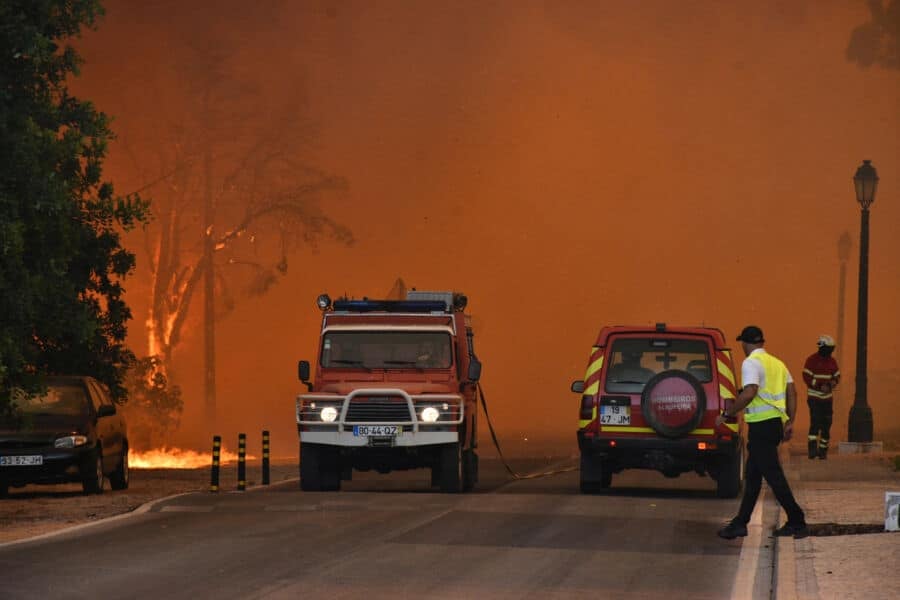 Mid-afternoon, the Management of Quinta do Lago group released a statement:

“Following the fire situation in Quinta do Lago, the Management of the Quinta do Lago Group would like to reassure all its residents that is closely monitoring the situation with the competent authorities that are acting onsite.

Some of the most critical areas close to the fire have been evacuated, as a precaution. We have also decided to close our Golf Courses, sports facilities and our outlets to ensure the wellbeing of our residents and guests.

We would also like to appeal to the entire community to remain calm, keep updated as local authorities are working hard on the ground. Keep safe”.

It was an attempt at calm in a day of everything but calm. 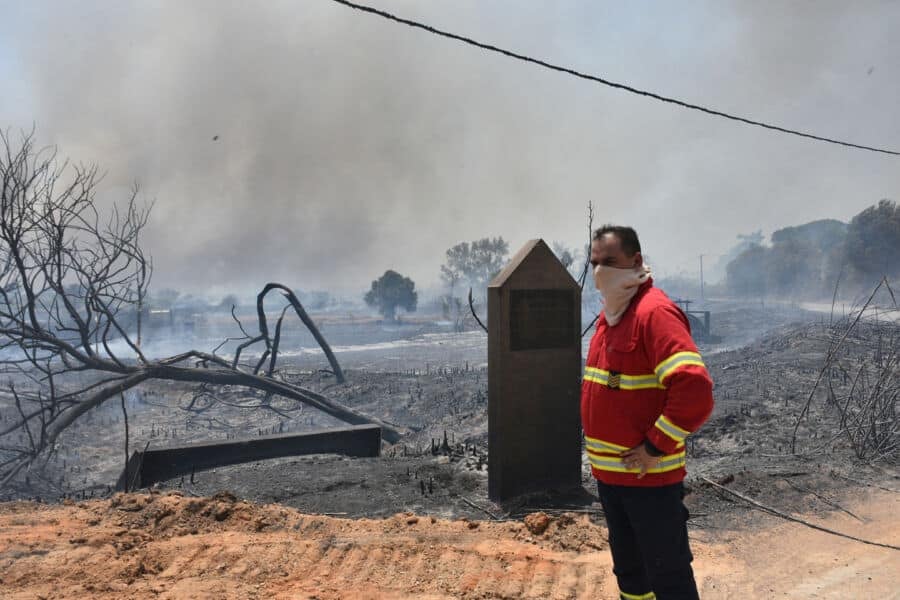 Even as the statement went out, reports suggested the blaze was bearing down on Quarteira.

Further north, where the central region – particularly the district of Leiria – has been under fire, quite literally, for the best part of a week, the situation was no better.

Fires that started breaking out last Thursday, and were deemed dominated by the weekend, reignited in the stultifying temperatures – that hit records in the high 40s – fanned by high winds and the lowest of low humidity.

Irony would have it that areas that previously escaped damage were now in the line of advancing flames.

Portugal is a tinder-box after an unusually dry winter: dams are at all time lows. “This is the worst conjugation of factors”, warned Interior Minister José Luís Carneiro at the weekend, underlining the government’s message that everyone now has responsibility to protect the common good.

The country has moved into a Situation of Contingency – following a Situation of Alert – for wildfires: access is prohibited to forested areas/ firefighting teams have been boosted/ any kind of work with machinery that could cause a spark that could lead to a fire has been put on hold. But it can never be enough: this is the traditional season for wildfires, and no amount of preparation appears able to change that.

In Vila de Rei on Wednesday morning, prime minister António Costa seemed to be suggesting the ‘main problem’ remains landowners NOT maintaining forest land. He urged every landowner to register their lands, insisting it will not imply any financial penalties, or taxes.

But even that tack has been challenged by media sources which claim people have already spent “fortunes clearing their land, when the State has done nothing”. 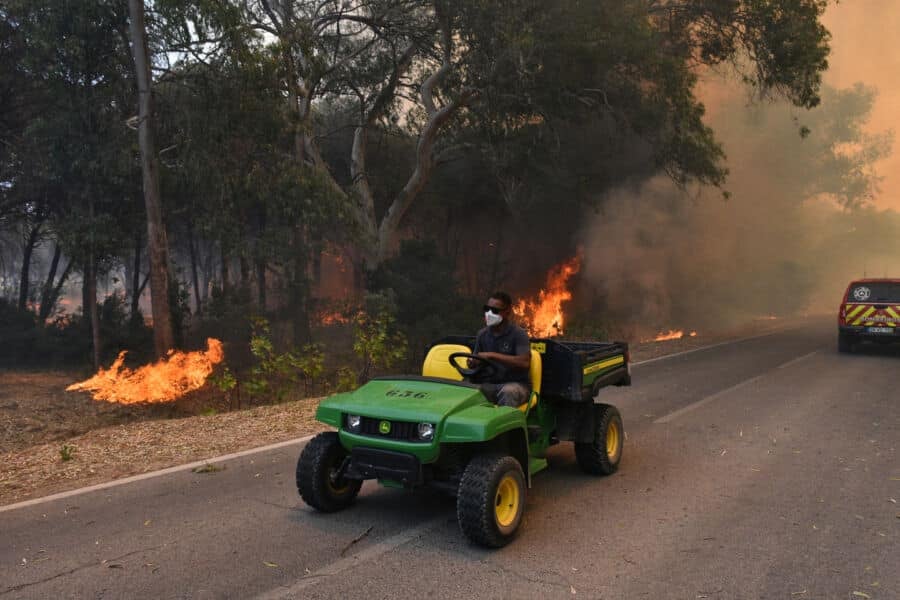 The school, for example, that burnt down in Bairrada, in Ansião on Tuesday, was a building owned by the State. According to tabloid Correio da Manhã, it “disappeared because vegetation led right up to the building”…

The greatest fear underscoring the last few days has been that Portugal could be enveloped by tragedy on the scale of 2017’s ‘killer fires’, which claimed the lives of over 100 people..

Climatic conditions are very similar. So far, however, there has only been one death – and even that has to be confirmed as being as a result of a fire: the carbonised body of a woman was found at the scene of a fire in Murtosa, Aveiro, on Tuesday evening. Very little about how the victim came to be there (indeed, who she was) has emerged. An autopsy will establish whether the woman died as a result of the fire, or due to other reasons. 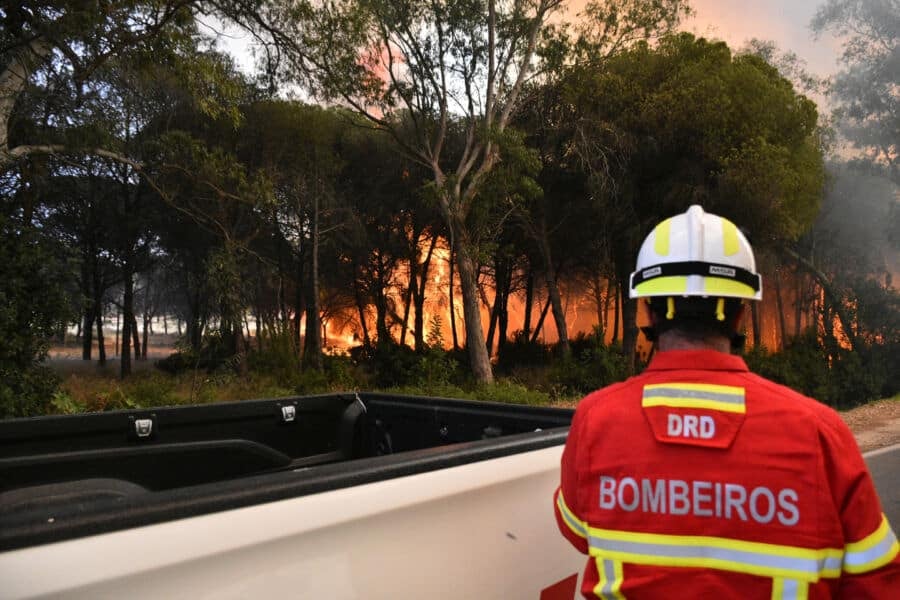 With 12 significant blazes underway on Wednesday morning – largely confined to the central region – reporters attested to over 20,000 hectares of forestland already burnt in the last week.

Over 17 air support were actively bombarding fires with water before midday – and this is the next ‘major problem’: university lecturer Helena Freitas has been explaining that one of the greatest issues facing the central region right now is ‘lack of water’.

Whereas coastal regions can see water-bombers fill and refill their compartments with seawater, interior fires do not afford that kind of ‘unlimited access’: there are fewer and fewer places where these planes can refill.

“We are living through a drama in terms of water”, the specialist in biodiversity and ecology working out of Coimbra University’s department of Life Sciences at the Faculty of Sciences and Technology told Diário de Notícias. “It is a chronic and extremely complex problem.

“It is one of the structural issues we insist on not tackling” – and it has already seen many desperate moments in this last week, as firefighters trying to do their best literally ‘run out of water’.

Under the Situation of Contingency no activities can take place in forested land. As such, the Super Bock Super Rock festival, already well set up near Meco beach in Sesimbra, has been relocated – at huge cost to organisers – to Lisbon’s Parque das Nações (Altice Arena).

The Faro Bikers’ Meet, starting today, has also had to undergo various logistical alterations, as the camping area was within land deemed ‘forest’. PM António Costa said on Tuesday that there were to be ‘no exceptions’ and thus the camping element has moved to an urbanised area close by. 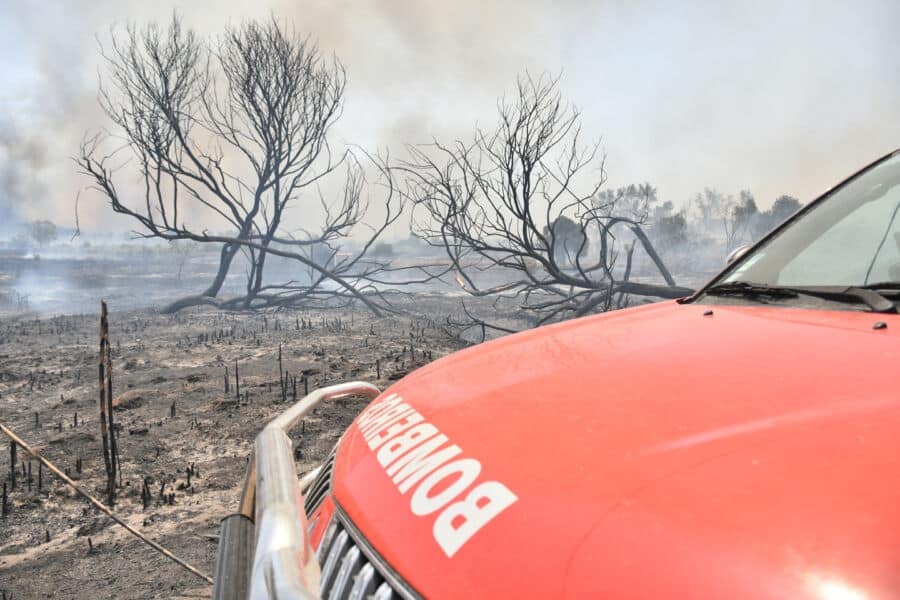 When there has been no loss of human life, focus settles on animals, and very sadly a number have already been lost in agricultural buildings burnt down in the Leiria region.

As we our paper edition went to press however, it was difficult to get a picture of how many animals and what kinds had perished. A figure for losses has also not yet been given, simply because the fires remain ongoing: even when they are ‘out’, the likelihood of reignitions remains constant.

At midday on today, there was no inkling of a let up in climatic conditions: 16 of Portugal’s 18 districts were under ‘red warning’ for fire risks; over 100  boroughs were at “maximum level of danger for rural fires”; a new fire had broken out in the Peneda-Gerês national park (from which all visitors have been removed, under the Situation of Contingency) and four Canadair water bombers, two from Italy and two from France, were on their way to try and help.

Nothing was looking good: Portugal is quite literally on fire.