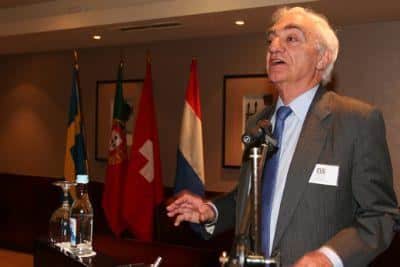 Portugal’s systemic problems, independent of the global recession, can only be solved through further reform and simplification of the judicial, administrative and fiscal systems said a leading banker on Tuesday.

Addressing a group of Dutch, Finnish, Swedish, Swiss and Belgian businessmen at an event co-hosted by the Swedish, Dutch, Belgian-Luxemburg, Finnish, and Swiss Portuguese Chambers of Commerce in Lisbon, the President of the Portuguese Bankers’ Association, Dr João Salgueiro, said that “Portugal’s government and non-governmental institutions didn’t always understand what the country really needed to move forward”.

“Most of our problems can be solved by adopting a simpler, constant and more efficient tax regime and a legal process that foreign investors can trust in,” he said.

The banker said that the country needed to send out scouts into the global market to see what the market needed in order to attract Direct Foreign Investment and more foreign businessmen and companies into the country.

Dr João Salgueiro also said that Portugal needed to invest in quality in all areas of expertise rather than try and produce the same kind of medium quality goods that the Chinese or Indians could make cheaper.

In the case of Portugal, he said that talking about the global crisis was “deceptive” since there were in fact four crises including the global financial crisis and a crisis peculiar to Portugal in terms of productivity, competitiveness and innovation that had existed for 25 years.

“The basis of Portugal’s problems does not lie in solely in the current difficulties and disturbances in the global financial markets but an evident and growing balance of payments imbalance that has been going on for years,” he said.

He also said that the bubbles in the property, shares and financial products markets had been “fit to burst for years” as prices had become unrealistically inflated throughout the 1990s and first five years of the new millennium.

“The inflated house prices and share values were unsustainable,” he said and one only had to look to past examples of systemic banking failures in Sweden, the United Kingdom and Japan in the 1990s to see what was on the cards.

“There was no realistic relationship of rationality between supply and demand,” the banker said but believed that the collapses and losses had “for the time being stabilised.”

Dr. João Salgueiro’s advice was the instillation of discipline in public and private finances, return to orthodox practices for a time, the financial markets needed to anticipate interest rate increases up to 4 per cent, more discrimination between good and bad investments, while businessmen had to learn to live and operate “flexibly in an increasing unpredictable world.”