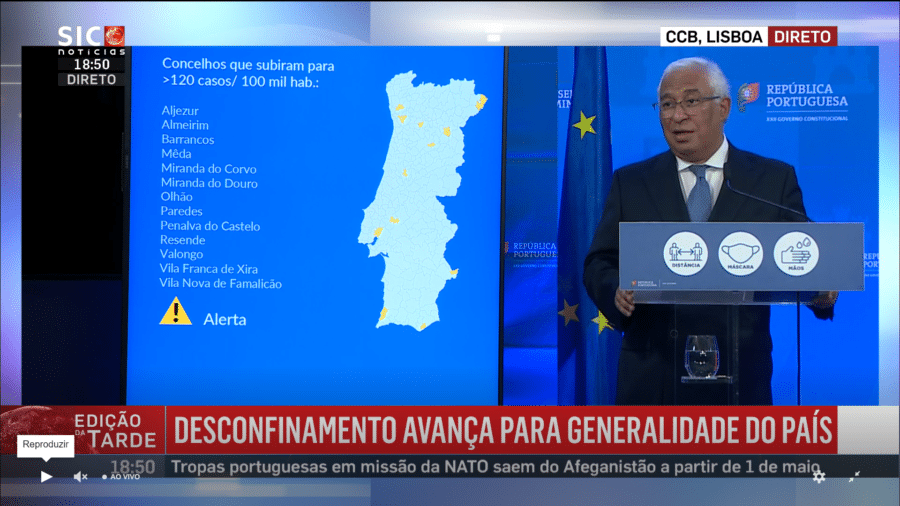 Portugal moves forwards to deconfinement stage 3 on Monday as planned – with the exception of 11 boroughs, two in the Algarve.

Of these boroughs – due to their incidence ‘ratings’ (meaning number of cases per 100,000 inhabitants) – seven stay ‘where they are now, but four ‘go backwards’, meaning their populations are once again ‘locked into’ their areas of residence; cafés, restaurants, shops and businesses that opened their doors two weeks ago will once again have to close.

“This is not meant as a punishment”, prime minister António Costa stressed this evening. “They are being adopted for the safety of every single person”. This is simply the only way authorities feel they can clamp down on rising rates of transmission.

In the Algarve, the news means Portimão is ‘going backwards’ (its ‘elevated’ level of risk in excess of 240 cases per 100,000 inhabitants means it is running with a caseload that is twice the government’s stipulated maximum of 120 cases per 100.000).

Thus all businesses that reopened in the coastal borough two weeks ago will be impelled to close their doors from 00.00 hours on Monday – as will be happening in the other elevated risk areas of Moura, Odemira and Rio Maior

Albufeira (still running with more than 120 cases per 100,000) is among seven boroughs prevented from moving forwards. The others are Alandroal, Beja (see update in brief news), Carregal do Sal, Figueira da Foz, Marinha Grande and Penela. What this means is that the restrictions currently in place ‘continue’ – though populations are meant to desist from travelling to another borough to visit a shop, café, restaurant or other activity.

This was where the first slightly ‘grey area’ appeared. Boroughs that have to ‘stay as they are now’ could in theory have populations thinking it is okay to travel over borough-borders as this is what happened last weekend.

Another ‘grey area’ is that in spite of some boroughs not being deemed ready to move forwards, educational establishments within all of them WILL be allowed to reopen on Monday (according to reports, this involves a universe of roughly another 700,000 pupils).

Populations in areas forced to ‘go backwards’ however are being told categorically that they are not allowed to travel beyond the borders of their borough – at any point of the next two weeks (unless of course they have the documented excuse of work, business or other essential reason).

Beyond this fairly dramatic news for so many areas that may have been hoping to ‘move forwards with the rest of the country’, 13 boroughs have been put on ‘alert’ – among them the rural borough of Aljezur, which until deconfinement stage two had barely had any cases.

Indeed the local council’s website is still only reporting six active cases. But DGS data suggests there are in fact 18.

Thus Aljezur, which has been at moderate risk of Covid-19 since the start of the pandemic, is suddenly under warning, sharing this situation with: Olhão in the east of the Algarve, and elsewhere Almeirim, Barrancos, Mêda, Miranda do Corvo, Mirando do Douro, Paredes, Penalva do Castelo, Resende, Valongo, Vila Franca da Xira and Vila Nova de Famalicão.

As Mr Costa stressed, some of these boroughs on alert have ‘high density populations’ (Vila Franca da Xira, for example, and Vila Nova de Famalicão). There has to be real effort in these boroughs by citizens to try and ensure the case incidence level retreats. If not, the risk is that in two weeks’ time, these areas too could be prevented from moving forwards – or worse, forced to take a step backwards.

None of these ‘penalties’ are ‘new’: the government has warned of their likelihood since the outset. It is simply the first time they have been enacted.

But, for the rest of the country, next Monday sees a new ‘breath of freedom’:

Concluding his announcement, the PM stressed that by the end of April “the whole population over the age of 70 will be vaccinated”. Indeed by the end of May, 96% of the population that has suffered the highest mortality could have been vaccinated (meaning all those over the age of 60 should have been offered their shots). Portugal “has to continue fighting”, he said – adding that even vaccinated people have to ‘stick to the rules’ of physical distancing and wearing masks.

The fact that the country is opening up, strangely, doesn’t mean people should feel any freer. The PM said “the duty of general retreat within the home maintains. People should remain careful with their social contacts. We should continue to have the most adequate behaviour possible. As much as we can stay at home, we should stay at home, as much as we can avoid social contacts, we should avoid these contacts”.

And as to the ‘limited’ frontiers with Spain, they are staying ‘limited’ to essential reasons for passage: no tourism.

Flights too are open to arrivals as long as they are not from countries with more than 500 cases per 100,000. All passengers must present negative Covid tests, said the PM, and then follow the stipulated period for quarantine.