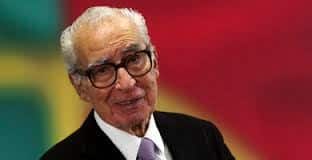 In a New Year that has seen countless iconic figures suddenly disappear, Almeida Santos – one the founders of Portugal’s democracy and honorary president of the PS Socialist party – has died, aged 90.

Santos collapsed at home in Oeiras, near Lisbon, a little before midnight on Monday. He had a history of heart problems in recent years. Prime minister António Costa has talked of his “profound upset and shock”, saying: “Portugal has lost a prince of democracy, and the Socialists have suffered an irreparable loss”.

Santos’ early life was marked by his opposition to the dictatorship of Salazar and involved him living and working as a lawyer and political activist in Mozambique.

He returned in 1974, on the invitation of the then president António Spinola, and took up various political appointments, being a great friend and collaborator with Mário Soares.

He was the author of “tens of books”, writes Público, he had various decorations – most notably the Grand Cross of the Order of Liberty and the Military Order of Christ, and he played a pivotal role in the negotiations that saw Portugal’s colonies gain their independence.

Wikipedia adds that one of Almeida Santos’ daughters “died of a drug overdose, which made led to him becoming a crusader in the fight against drugs”, and to his defence of legalisation.

As a mark of respect for his death, presidential candidates Maria de Belém, Sampaio Nóvoa, Marcelo Rebelo de Sousa and Cândido Ferreira cancelled all appointments planned for the day, with Sampaio Nóvoa even pulling out of a TV debate scheduled for RTP this evening.

He told SIC television news that people of Almeida Santos’ mould “are absolutely unsubstitutable”, adding “the world will never be the same”.

Tributes have flooded news media throughout the day, while Almeida Santos’ body was cremated earlier this afternoon “with no religious ceremony”. It was what he wanted, explained Público in a four-page online report detailing the nonagenarian’s extraordinary life.