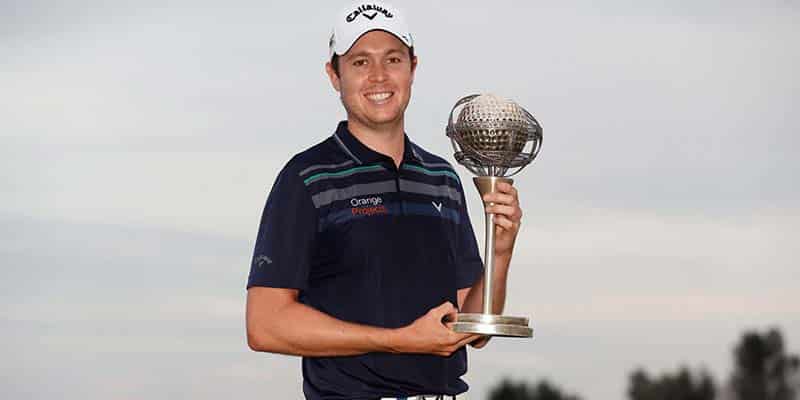 Since its inaugural edition in 2007, the Portugal Masters has established a fabled reputation for drama and excitement, and this year’s 13th edition at the Dom Pedro Victoria Golf Course, Vilamoura, attended by almost 40,000 spectators and with millions watching on live TV, further enhanced the event’s tradition.

Englishman, Steven Brown had arrived in the Algarve mentally preparing himself for next year’s tour school but finished the tournament as 2019 Portugal Masters champion.

Before the tournament, 32-year-old Brown occupied 150th position on the Race to Dubai, and with only the first 115 places guaranteeing a tour card for next season, he faced the real possibility of competing on the tour school circuit next year. Amazingly, however, he secured his maiden European Tour victory, courtesy of a scintillating closing round 66, including three birdies and an eagle on the par-five 12th at Victoria.

On Saturday’s penultimate round, the Englishman returned a season-best score of 65 to begin the final day just three shots off the lead, and he eventually overcame the South Africa duo of Justin Walters and Brandon Stone who finished in joint second behind the champion.

An ecstatic Brown seemed in dreamland as he reflected on his career-changing achievement: “It’s hard to put into words. You just never know with this game. It was quite a weird day. I never thought this was going to happen. I was just counting down for tour school to get my game ready for that.”

On Sunday’s closing round, Brown reached the turn in 33 and a birdie on the 11th, followed by a magnificent eagle at the 12th, established his final score of 17-under. Closely observing the leader board, Brown held his nerve by responding to the challenge of Stone and Walters with steady, focused, par golf on the closing holes for a memorable one-stroke victory.

Brown’s 72-hole aggregate of 267 has earned him a two-year tour exemption, and a dramatic rise of 81 places on the money list, guaranteeing his place in the upcoming Turkish Airlines Open, the first of three post-season playoff tournaments.

While the Englishman’s Portugal Masters achievement appears to have stunned even him, he revealed a mental strength which contributed to his success: “The last few weeks I’ve had a calmness in my head. I liked the fact that I had to go for it today. It was do or bust. The shot I hit into 12 (a 270-yard 3-wood to 10 feet, setting up eagle on the par 5) is the best I’ve ever hit. I had to keep going. Now I’m heading to Turkey, which is amazing. I went there a year ago as first reserve and didn’t get to play. So, it will be nice to tee it up this year.”

The Portugal Masters tradition of providing both fantastic golf and high emotion is also reflected in this year’s story of Justin Walters who, along with Brandon Stone, finished in joint second. In 2013, Walters was also runner-up, just one stroke behind another Englishman, David Lynn. However, this year’s performance is all the more remarkable as he has secured his tour card just weeks after the death of his mother and after sadly losing his father in the summer.

The magic and the emotion of the Portugal Masters has endured over the years, and the 13th edition has again provided more memorable chapters in the history of this illustrious tournament. Indeed, the drama provided by both Walters and Stone, in leading the chasing pack, greatly contributed to the spectacle being beamed to over 400 million viewers across the planet.

Stone had begun the day with a two-stroke lead, and a wonderful bunker shot on the 2nd for birdie set the tone for the thrilling finale. A stunning approach to the third allowed him to take a three-shot lead, while a clever up and down from the bunker on the fifth moved him to 18-under. However, Walters advanced when Stone surprisingly made bogey on the sixth. Brown, meanwhile, had birdied the second from five feet and holed a 25-foot putt on the ninth, but was still three strokes off the lead, an advantage retained by Stone until Walters birdied the 14th, and further reduced the deficit.

Brown’s determination though was clearly signalled by the fantastic second shot to five feet at the 12th, which he converted for eagle and a share of the lead with Walters. A bogey from Stone at the 13th created a three-way tie for the lead, with Walters then three putting the 16th before making the most of the par five 17th and bogeying the last. Stone’s three putt on the 16th then handed the initiative to Brown, who demonstrated admirable resilience by maintaining par golf to the finish, and earned him the coveted Portugal Masters title.

The Portuguese challenge was led by Ricardo Gouveia, and while not hitting the heights of last year – when finishing on 15-under par – Gouveia’s return of 8-under was highly commendable, as was the performance of Tomás Santos Silva who carded the same score.

Tiago Cruz, two strokes further back on 6-under, also returned another very respectable score from a home player.

Portuguese golfers have already served notice of their determination to maintain the clear progress already shown, and with the continued support of the FPG (Portuguese Golf Federation), the future of golf in Portugal looks extremely positive.

Planning is already taking place for next year’s 14th Portugal Masters, with another star-studded field competing in the Algarve guaranteed. What’s also assured is that the enduring magic of one of the European Tour’s most prestigious events will continue to provide an unforgettable sporting occasion for spectators, and also the international TV audience.

With the promise of memorable achievements, like the first-ever, historic score of ‘59’ carded on the European Tour by England’s Oliver Fisher in 2018, and the magical tale of this year’s champion, the Portugal Masters, staged in the beautiful Algarve, will continue to be an unmissable, world-class sporting experience on the golfing calendar.