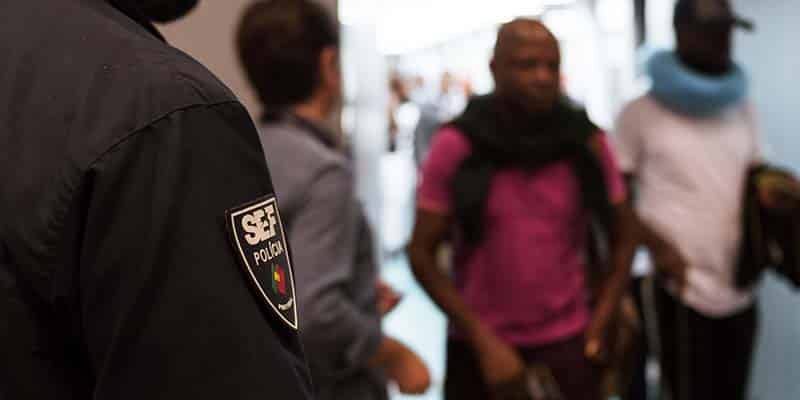 At a moment when the situation of immigrants is very much in the public eye (click here), Sábado has carried a worrying story on how authorities in Portugal have simply ‘lost track’ of thousands of them.

Says the online, “in 2019 and 2020, Portugal received 2,832 requests for international protection, and conceded 507. What happened to the other people? No-one knows”.

Indeed, media reports often cite immigrants who have been ‘issued with orders of expulsion’ – but reports are always vague as to whether this has actually been carried out.

Sábado gives the example of the first load of young men who arrived in a rickety fishing boat from Morocco in December 2019.  “After being arrested in the Algarve… the eight occupants knew exactly what to do. They requested international protection from the Portuguese authorities, alleging persecution in their own country. Abdel Aziz was one of them. Along with the rest of his companions, he was housed in installations of the State while he awaited the bureaucratic process of conceding either refugee status, or that of subsidiary protection. When months later the process ended, with the request refused on the grounds that it was bogus, Abdel Aziz was not notified: authorities did not know where he was – a situation that repeated itself with four of his companions”.

According to various sources, Abdel Aziz’s story is not unusual. He is simply one of thousands of mainly young men in recent years who have used the asylum law to enter Portugal illegally.

A judicial source told the online: “They know when they get here and ask for asylum they can enter – and while the process is going on they leave for other countries where they have family or contacts. It has been like this for years…”

Since 2019, estimates are that more than 2,000 people have played the system thus.

Sábado explains that over the last few weeks it has questioned the Ministry of Internal Administration (MAI) “several times”, SEF (borders agency) and the Portuguese Council for Refugees (CPR). But none have wanted to give satisfactory answers.

“MAI never answered any questions at all. The CPR to which asylum seekers were referred for accommodation said it had “not yet compiled the statistical data relative to this subject”. SEF explained that the law allowed for requests to be considered over a six month period, so they “could be in different phases and not corresponding for this directly to citizens in parts unknown”. When asked how many WERE in parts unknown, SEF did not answer”.

MAI – and particularly its minister Eduardo Cabrita – has been under exceptional criticism for months now. Yet last week saw prime minister António Costa show that he has no intention of wiping the slate clean by replacing Mr Cabrita (for the time being, at least). In parliament on Thursday – after yet another MAI faux-pas in form of unbelievable crowds and confusion outside Alvalade Stadium for a decisive Premier League match – Mr Costa faced down MPs calling for the minister’s dismissal saying: “I have an excellent minister and I get on with him very well”.

The reality however is that Mr Cabrita cannot seem to shake off PR disasters – from the inflammable fire protective clothing scandal (click here), to difficulties in preparing for fire seasons (click here), to the death of a Ukrainian job-seeker in SEF custody (click here) and the jack-booted civil requisition of a tourist resort (click here). He seems to be forever where the buck should stop in a mélange of misfortunes. But for now he stays where he is running a ministry under fire (click here).

The problem with the system when it comes to handling immigrants is that while asylum requests are being considered, the men (and occasionally women) are “at liberty to circulate on national territory”. This sees most of them crossing borders and… disappearing.

A source from SEF admits that “in many cases Portugal is simply a country of transit. The object of these people is to reach Germany or France which can give them more in the way of conditions. As Portugal gives the image of being a ‘welcoming country’ (to refugees), there are groups that take advantage of this. There is an enormous amount of illegal mobility within the European Union – people who go from country to country hoping for an ‘extraordinary regularisation of immigrants’ to resolve their problem…”

Sábado’s report even referred to the 74 Syrians who basically forced a TAP plane to fly them from Guinea Bissau to Lisbon in 2013 (click here).

Travelling on false passports, the whole lot of them disappeared within weeks… and no one has a clue where they went.