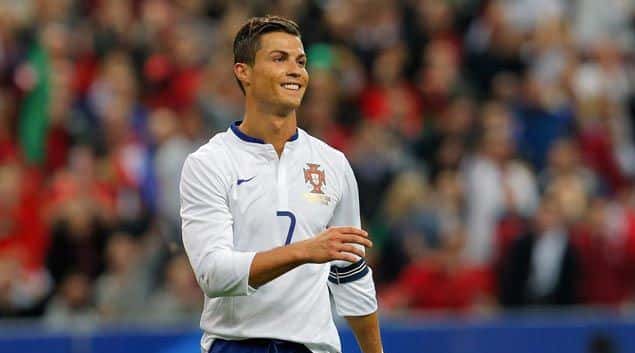 A stoppage time header from Cristiano Ronaldo gave Portugal an important victory over Denmark in their quest to qualify for the EURO 2016 finals.
With few chances for either side it was left to the Portugal captain to head home substitute Quaresma’s pinpoint cross in the fifth minute of added-on time. This goal brought Ronaldo’s total of goals, in UEFA competitive matches, to 22. This equals the record held by Hakan Sükür (Turkey) and Jon Dahl Tomasson (Denmark) but Ronaldo could make the number one spot his own if he scores in Portugal’s next qualifier against Armenia at the Algarve Stadium, Faro on November 14.
Albania, who surprising beat Portugal 1-0 in the previous round of games, were involved in violent scenes when they travelled to Serbia. The European Championship qualifier was halted and subsequently abandoned by English referee Martin Atkinson when a drone carrying the Greater Albanian flag – as opposed to the current flag of the nation – which represents the wider concept of a national state that covers all the areas where ethnic Albanians live.
The two sides were meeting in the Serbian capital city of Belgrade, at Partizan Stadium, for the first time since 1967. Serbia defender Stefan Mitrovic pulled down the flag, leading to a mass brawl between the players.
Riot police then moved in when around a dozen fans invaded the pitch and attacked Albania players. The flag stunt was particularly provocative given the historic relationship between the two countries, and Serbia supporters’ reputation for nationalism and violence. Kosovo, which is predominantly ethnic Albanian, has declared independence from Serbia, which in turn refuses to recognise the ‘new’ country.
Furthermore, reports emerged claiming that the brother of the Albanian Prime Minister was involved in the stunt. Olsi Rama was alleged to have been arrested in the VIP box after the match. “He was arrested on suspicion that he masterminded and executed the incident in which a flag with a map of greater Albania was flown over the pitch and the terraces, after which the match between Serbia and Albania was abandoned,” Serbian state television said on its official website.
By CHRIS WRIGHT