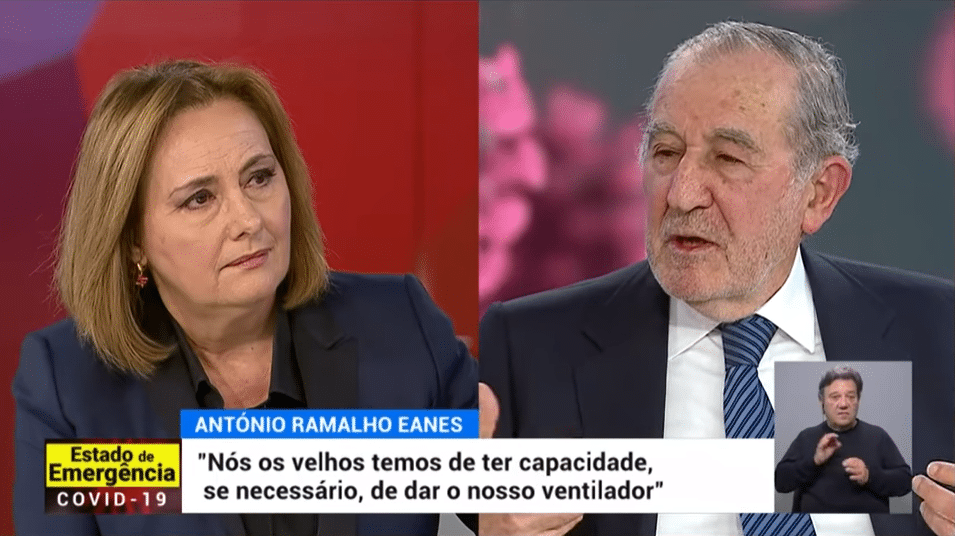 Portugal is in the global spotlight this week – with media outlets everywhere carrying stories of ‘just how bad things have become’ in the little country on the edge of Europe that was not so long ago hailed as “a success story” in its battle against Covid-19 (click here).

Completing week three now of the second national lockdown, with no sign yet of restrictions easing, former president Ramalho Eanes has given a sombre interview to Rádio Renascença, suggesting it’s time for the government to ‘request European aid’.

Just as the number of new infections is truly beginning to fall, it is proving ‘a terrible week’ for international exposure.

Prime minister António Costa has been doing his best – visiting hospitals and trying to calm citizens’ concerns over vaccination – but a ‘scandal’ in which low-ranking politicians, cleaners and pastry shop workers have been allowed to push ahead of vaccination priorities, as well as the spectre of ambulances stacked up outside struggling hospitals was all it took for international press to hone in and highlight the worst.

It hasn’t helped that the New York Times seems to quote economy minister Pedro Siza Vieira as blaming the Portuguese for the massive spike in infections post-Christmas.

The paper also interviewed Tomás Lamas, a doctor who works in the intensive care units of two hospitals in Lisbon, as saying hospitals are now being forced to make life or death decisions about which patients to treat.

“Three months ago, we had patients who were admitted to intensive care but who are now not being considered basically because they have chronic diseases or are old”, he said.

“I really didn’t believe this could ever have happened in Portugal, having patients going door-to-door to find a hospital to be saved…”

The NYT spoke with minister Vieira over the telephone, citing him blaming the fact that Portugal had ‘the highest death rate in Europe’ on citizens who “didn’t even respect the restrictions we had in place” over the festive season.

As journalists here have stressed, there WERE no restrictions in place over the festive season: the government declared ‘free mobility’ to people from 23-26 December inclusive.

Contacting minister Vieira’s office, a source admitted the comments “were not intended to lay blame on the Portuguese people”, this seems to have been more “the interpretation of the NYT journalist…”

But the damage is done: the international press has had a field day with its headlines. The Guardian interviewed doctor João Colaço who described “many patients” very sick indeed “some of them young people. Those that survive need help for weeks, months, even years”.

Associated Press has run with the ‘rogue vaccinations’ scandal and what it describes as “disorder in parliament over who should be vaccinated first”; Brazil’s A Folha de São Paulo believes “Portugal has lost control of the pandemic”, focusing on forecasts by Ricardo Mexia, president of the national association of public health doctors who told them “there is no indicator in recent days that is not in its worst conditions”.

A Folha de São Paulo’s article refers to the SNS health service ‘close to its limit’, long lines of ambulances that have become constants in front of Lisbon’s Santa Maria hospital, and the slow roll-out of the vaccination programme.

Deutsche Welle highlights the help Germany has just given (click here) and the fact that the “situation is tense… the whole population is very nervous in light of new dramatic developments in the last two to three weeks”.

El Mundo headlines “Portugal goes from miracle to collapse” – and is now the worst affected country “on the planet” – while France’s Le Figaro brings the tone down a notch, suggesting Portugal is “the epicentre of the new coronavirus in Europe”.

Italy’s Il Post explains the British variant has had “a great influence in the increase in cases and deaths from Covid-19 in Portugal” and stresses that Portugal is one of Europe’s member states with the ‘least’ when it comes to hospital capacity, and the fewest number of nurses per inhabitant.

As PM Costa is sending out the message, ‘things are slowly starting to turn in the right direction’, the international press is still running with situations that coloured the end of January – the month where nearly 5,600 people died.

To a large extent former president Eanes may be too. But his closing words to Rádio Renascença temper that possibility. The 86-year-old who said at the beginning of this crisis that if it came to a choice over who should live or die, the elderly should give up a chance of a ventilator, says he believes a request for European aid “should be made when it is necessary, not when it is indispensable”.

The former military man who was Portugal’s head of state from 1976 to 1986 considers that “we cannot continue living in this situation with thousands of patients per day and many hundreds of deaths as well”.

Portugal’s hospitals as of today’s bulletin have 6,412 people being treated for Covid infections, and a ‘record number’ of 904 in ICUs.