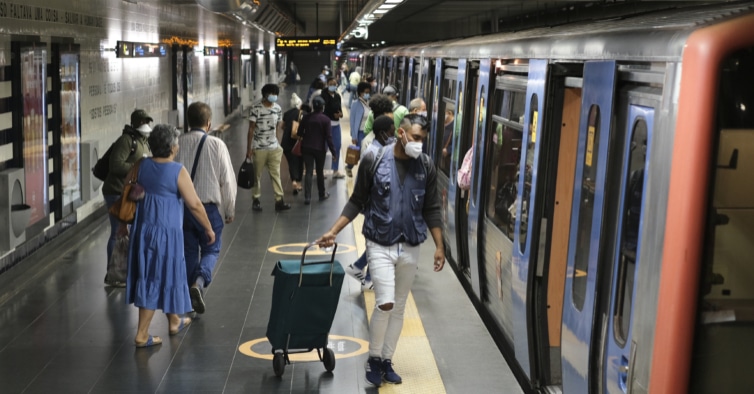 But no joy from public health doctors: barely a squeak from government

Upbeat news this week that Portugal has attained the conditions defined by experts to drop the requirement to wear masks on public transport has been instantly wrestled to earth with a thump… by the experts themselves.

Gustavo Tato Borges, a familiar face of caution (if not pessimism) throughout the pandemic – and president of ANMSP (the national association of public health doctors) – has admitted that “we are in an epidemiological situation of apparent control, moving towards a situation of calming – but a new wave is expected next autumn/ winter so people should prepare themselves for a worsening at the end of the year.

“To face (the new wave) Portugal should work to guarantee adequate supply of the number of vaccines to protect the most vulnerable, continue with strong awareness campaigns on the importance of protecting ourselves and maintaining close vigilance on the number of new cases, internments and deaths”, he added.

On the basis that this news hasn’t yet hit the main media outlets (it is circulating mostly online) it is safe to say that none of the authorities, nor accepted experts, seem prepared to relax their guard – continuing to impress over the perceived importance of vaccinations,  when failings of the Covid vaccinations are now commonly accepted.

In the European parliament, for instance, German MEP Christine Anderson has openly come out against the mass vaccination campaign (that has patently failed to stop transmission/ the spread of new variants/ deaths of the most elderly people), declaring “this vaccine scandal will go down as the biggest scandal in medical history”.

Her views have been clear since the outset  when Covid vaccines were introduced as being ‘just two shots’ which would leave people protected. (Portugal is due to administer 5th shots in October).

Other critics publicly go even further than Christine Anderson, suggesting the entire ‘crisis’ constructed around Covid-19 has been a scandal.

For now, we can be comforted to know that this country has arrived at the ‘safe territory’ pointed at by experts and the government for the relaxing of measures, but that they still believe it might be safer to go on enforcing them.

The ‘safe territory’ indicated previously for removing restrictions that remain in place was a point when deaths fell to 20 per MILLION inhabitants over 14 days, and when there were less than 170 Covid patients in intensive care.

According to Expresso, both these objectives have been achieved. “Portugal hit the target for deaths on July 23, dropping to 18.5 deaths (ie below the target of 20) the next day. As well as this, intensive care units last week had 49 beds occupied (by Covid patients), according to the weekly report by the DGS health authority”.

France, Belgium, Denmark, United Kingdom, Norway, Sweden, Finland and Iceland no longer require masks for any reason at all.

Today’s online reports say Portugal could join this list instantly “if the government so decides”.