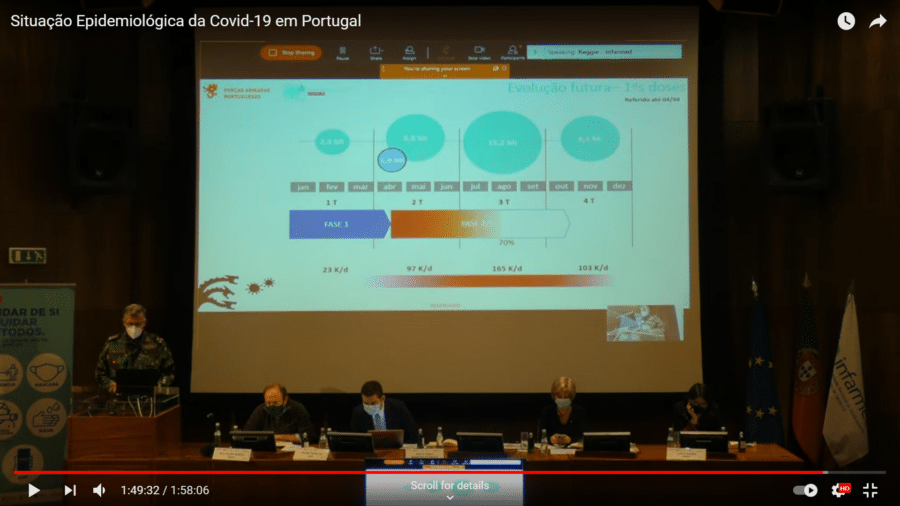 Portugal has a “very much lower (Covid) incidence level than the majority of countries in Europe”.

This has been one of the many positives coming out of this morning’s meeting at Infarmed – a precursor to the government deciding on whether the country moves forwards as a bloc to the third stage of deconfinement next Monday (April 19) – or whether some boroughs get ‘left behind’, due to their ostensibly high infection ratios.

Another major plus is the effect the vaccination programme has had on the number of elderly citizens becoming seriously ill and dying.

Epidemiologist Baltazar Nunes of INSA (the national health institute Ricardo Jorge) has told the meeting that between January and April between 78 – 140 deaths have been ‘avoided’; there was a 9-10% reduction in hospital admissions and a 3-5% reduction in the number of beds occupied in intensive care units.

The reality that an Rt (transmission) rate above 1 has NOT translated into increased pressure on hospitals has actually led the experts to suggest a slightly different way of quantifying ‘cases per borough’.

As we explained in an earlier text, the formula used up till now has meant that a borough with a small population spread over a large area can have less than a handful of cases but when it comes to multiplying that number up to a population of 100,000, they suddenly appear ‘high’ or even ‘dangerously high’.

This happened at the outset of the pandemic in São Brás de Alportel, in the Algarve (click here) – and it has happened in many small/ sparsely-populated boroughs ever since.

Thus today’s ‘idea’ put forwards by mathematician Óscar Felgueiras is for a new indicator to be considered before making radical decisions on ‘pausing’ the reopening programme. He has termed it “adjusted incidence” – a reading that takes the ‘real situation’ of a borough into account, and doesn’t blow it up to suggest ‘alarming numbers’ (which don’t exist, have never existed and simply ‘terrify people’ for no reason).

Expresso has given a perfect example of the lunacy of previous formulae: Vimioso, in the north, is at the moment suffering an infection level of 249 cases per 100,000 (when the ‘red line’ is 120 cases).

However, the reality in Vimioso is that there are only 10 people who have tested positive in a borough that covers 481 sq kms, and has only 4,000 inhabitants.

Using the “adjusted incidence” formula, a number of boroughs previously labelled ‘at risk’ suddenly become ‘not at risk’.

His suggestion to the meeting (again, this will all have to be confirmed by the government after the Council of Ministers on Thursday) is for people to ‘reduce’ the number of contacts they have outside their family bubble (household).

Baltazar Nunes has also encouraged ‘increased testing and vaccination roll-out “particularly among the over-65 age group” as a way to stem the rising Rt.

Yesterday, in Coimbra, the first indications that some people are choosing not to be vaccinated appeared (click here) and today in Lisbon researcher Carla Nunes of the New University of Lisbon has added further information.

She told the meeting that the ‘intention not to take the vaccine’ has increased from 1.7% (at last time of inquiring) to 7.8% – saying that “even though there have been some alterations in (people’s) intentions, it doesn’t appear that there will be problems from the population in the execution of the vaccination plan…”

The meeting remains ongoing, with vaccine coordinator Henrique Gouveia e Melo going over the schedule for the arrival of new doses of vaccine through this month (click here), and explaining that by the end of May, beginning of June, all citizens in Portugal over the age of 60 should have received their vaccinations.

This last piece of news is ‘particularly important’, he explained, as 96.4% of all deaths in Portugal registered as due to Covid-19 have occurred in people over the age of 60.