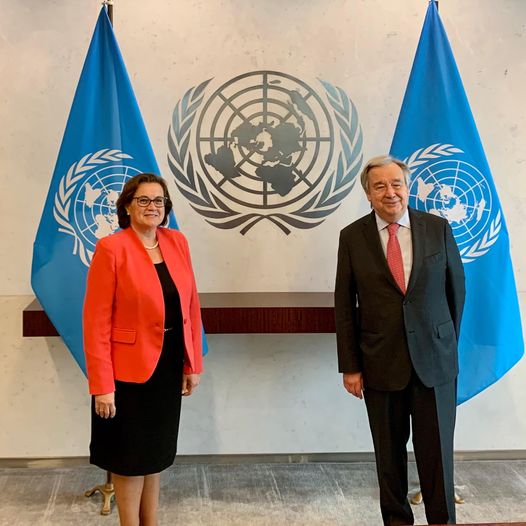 United Nations Secretary-General António Guterres has stressed the importance of Portugal as a “pillar of the UN” after the country’s new permanent representative to the organisation, Ana Paula Zacarias, presented her ambassadorial credentials to him.

At a ceremony at the UN headquarters in New York, Zacarias was told by the former prime minister of Portugal that he was convinced the excellent relations between Portugal and the UN “will be able to develop further” with her arrival.

“Portugal is a very important pillar of the UN,” he said.

Speaking to Lusa Ana Zacarias said Portugal would have as a priority at the UN the issue of the world’s oceans, and announced that the country’s president, Marcelo Rebelo de Sousa, will be travelling to New York in July at the invitation of the president of the UN Economic and Social Council (Ecosoc) for a high-level political dialogue on sustainable development.

Zacarias, who succeeds Francisco Duarte Lopes as ambassador, pledged “full support” for the secretary-general’s agenda and the common agenda, specifically in strengthening the UN’s capacity for action, conflict prevention, the importance of putting women and girls at the centre of issues, as well as engaging young people.

“We also have a very important priority which is the oceans,” she said. “We will host in Lisbon, together with Kenya, the great Ocean Conference and our idea is to stress that when we talk about oceans, we are also talking about climate, security, development and sustainable tourism. It is a bigger issue than it may seem.”

The UN’s peace missions in various parts of the world, particularly in Africa, and migration, were among other of Portugal’s priorities cited by Zacarias, a former secretary of state for European affairs.

“Portugal is a country that has always defended multilateralism and this is particularly important at this very difficult time we are going through,” she told Lusa. “We need a true and deep multilateral agenda to help solve the major problems we are facing in terms of security and defence, in terms of climate, the fight against inequalities, reducing the digital gap, promoting gender equality, among other fundamental issues that require the multilateral agenda to continue to succeed.”