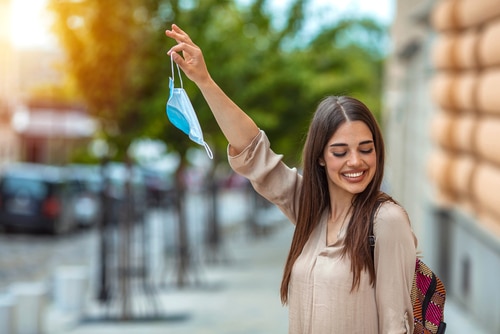 STORY AS IT APPEARED IN OUR PAPER EDITION ON FEBRUARY 24

Portugal’s Council of Ministers approved the first steps towards regaining our freedoms last Thursday – and president Marcelo rubber-stamped them on Saturday.

But as delighted restaurants reported a notable upswing in business, not everyone is happy – particularly the parents of children over the age of 10 who had been hoping for relaxation of the rules for mask-wearing in classes.

According to reports, the entire school community was looking forwards to last Thursday’s announcement. The assurance that ‘all restrictions will go in five weeks’ time’ has not really made up for the disappointment.

First, to the five restrictions that did fall as of Saturday late morning. They were the need for:

The country has moved from the State of Calamity it was in, to one of ‘Alert’, which will remain in force until midnight on March 7.

But for reasons of their own, the experts who have been leading Portugal’s response to the pandemic, as well as the DGS, have hung on to the need to continue obliging people to wear masks in “indoor situations in which they are requested currently”, and that leaves hundreds of thousands of children and teens obliged to continue learning in the classroom behind masks, when some can then go on to socialise in bars and discos without any coverings on their faces at all.

Very few see what Jorge Ascenção, president of the national association of parents, describes as “coherence” in the decision.

Iniciativa Liberal was the first political party to point this out last week. The leader of the party  João Cotrim de Figueiredo – himself a father of four – railed that “children and young people will continue to see their development very compromised when it comes to acquisition of language, communication, expression and social interaction.

“It is urgent to move forwards in recovering learning; recovering from the damages the pandemic has caused on the development of children and young people”, he said, dubbing the reluctance to do away with masks in schools as “is a serious failing by the government”.

The truth, in the end, is that if parents are as upset as reports claim them to be, they have not shown it – and thus the restrictions in schools are likely to remain in place until the end of March.

CNN Portugal interviewed Gustavo Tato Borges, president of the association of public health doctors, who, far from conceding that mask-wearing rules ‘made no sense’, suggested “ideally masks should still be used in discotheques and bars.

“It would be fundamental as very often these spaces are poorly ventilated” he said, adding that in an ideal world there “should even be a separation of the dance floor, where the use of a mask would be obligatory, from the space for consumption of drinks.”

Just because “something is not applied correctly in one place does not mean we can demand that it ceases to be correctly applied in others”, he added.

What has been established is that there is no need to wear masks in the street anymore (a stipulation that became very confused as it was,  as it only ever applied to situations where people could not keep an adequate physical distance, but because it was constantly referred to as ‘obligatory’ many used masks when they were walking, even driving, in isolation).

Minister for the presidency Mariana Vieira da Silva said the Council of Ministers has also acknowledged that the “total elimination of all restrictive measures in place” will come within the next five weeks.

“It’s not a calendar we can define, otherwise we would already have approved it, but it is the forecast the experts gave us referring to reaching the target number of 20 deaths per 100,000 inhabitants over 14 days”, she said.

The idea is for the government to review the epidemiological situation every fortnight, on the basis that forecasters’ projections may come sooner than they think.