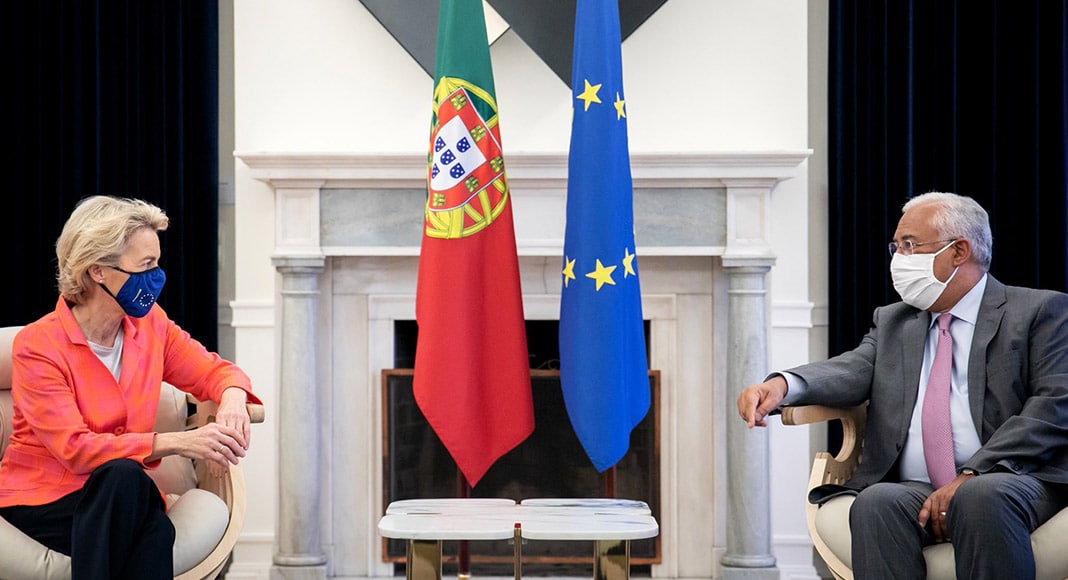 European Commission President Ursula Von der Leyen alighted in Portugal this week to accompany PM António Costa’s presentation of national plans for ‘recovery’. Her arrival could not have been more timely: political grumblings nationally were threatening to come to a head and provoke yet further crisis. Somehow, as if by magic, this looks like it has been avoided – or at the very least muted.

On the face of it, Ms Von der Leyen had no part in a strategy to deflect attention from what minority parties’ ‘dissent’ was auguring. Only President Marcelo Rebelo de Sousa and Prime Minister António Costa were seen to be actively encouraging unity and warning of the follies of derailing government plans for the upcoming State Budget.

But on another level, the European Commission President’s speech given at the Champalimaud Foundation on Tuesday gave the government exactly what it needed: recognition, respect and enthusiastic support.

Ms Von der Leyen stressed outright that she believes “the past and present of Lisbon and Portugal can be the guide for our future”.

“For centuries, the people of Portugal have influenced Europe in many ways – intellectually, culturally, politically. I think of the enchanting landscapes and mountains of Sintra which inspired some of the world’s great minds and artists, from Lord Byron to Richard Strauss. I also think of the vibrant Portugal of today – full of sporting heroes, young tech talent, clean energy and a perfect mix of tradition and modernity. Or the leading role Portugal plays in Europe and the world – at the helm of the biggest European and global institutions.

“And I also think of how the people of Portugal responded with humility, responsibility and solidarity when the pandemic hit Europe. I could mention, for example, the online platform – called ‘Host a Hero’ – which allowed people to give health workers from Porto to Lisbon a spare room or apartment so they could rest and keep their families safe. Or I could mention the historic decision by the government to grant temporary citizenship rights to migrants and asylum seekers so they could access social security or health care.

“From personal stories of sacrifice to the millions of people who downloaded contact tracing apps, – Portugal showed the best of itself and the best of Europe. The pandemic is not over yet – and there is still a lot of work for all of us to do.”

The speech went on, tracing European hopes to have become a “climate neutral continent by 2050” with high-speed trains and clean mobility – and all the way through it, Portugal’s focus on being a frontrunner in energetic and digital transition was plugged to the point it was hard to remember that one of the most significant political figures in Europe was describing a member state carrying one of the heaviest levels of public debt in history.

But that was the beauty of the moment: Ursula Von der Leyen added hope at a point when the country’s two greatest optimists (the prime minister and president) looked very much like they needed a bit of sparkle.

Her speech provided the gear-change Mr Costa needed, and from then on it was ‘back to business’.

Portugal wants to be among the first to seal a recovery plan with EU
The country’s recovery plans are to be approved by parliament on October 14, the PM told his audience – with the ‘first draft’ being sent to Brussels a day later.
Said Mr Costa: “We want to be among the first countries to close the deal with the European Commission… because we want to be on the frontline of this work for the resilience and recovery of Europe.”

“At the same time, we have to control the pandemic, we have to be able to recover our economy, protect jobs, recover jobs and incomes that have been lost, and we have to recover the trajectory of convergence that we had with the European Union.”

It’s a “critical challenge”. The country has to face it “with the conviction that recovery doesn’t mean returning to where we were” back in February.

“We have to come out of this crisis stronger,” meaning more socially resilient, more productive and more competitive, he said.

The PM stressed, however, that the government intends only to take advantage of the grants available in the EU’s ‘bazooka’ package. The loans available (to the tune of around €15.7 billion) would make no sense for a country already so mired in debt.

As for the budget, political dissent “it would be insane”
Holding on to the theme of ‘sense and debt’, Mr Costa used the occasion to stress a political crisis prompted by arguments over next year’s budget (something that other parties keep threatening, particularly the left-wing Bloco de Esquerda) would be “insane” as well as “unjustified”.

“More than ever, it’s important to have a good budget,” he said. “Getting through this economic and social crisis doesn’t simply depend on European support. More than anything, it has to depend on us adopting good policies to respond to the needs of companies, protect jobs and create a climate of confidence to attract investment which, in turn, could take advantage of resources made available by the European Union.”

The PM gave the impression that negotiations with the left were showing ‘positive advances’, albeit the process was “not easy” and indeed hasn’t been easy for the last four years, he grinned.

The greatest stumbling block appears to be from BE which has said it won’t give its blanket approval unless the budget “transforms the lives of people”.

That said, there are still 12 days to go before the budget has to be approved – and in politics 12 days can be a lifetime.