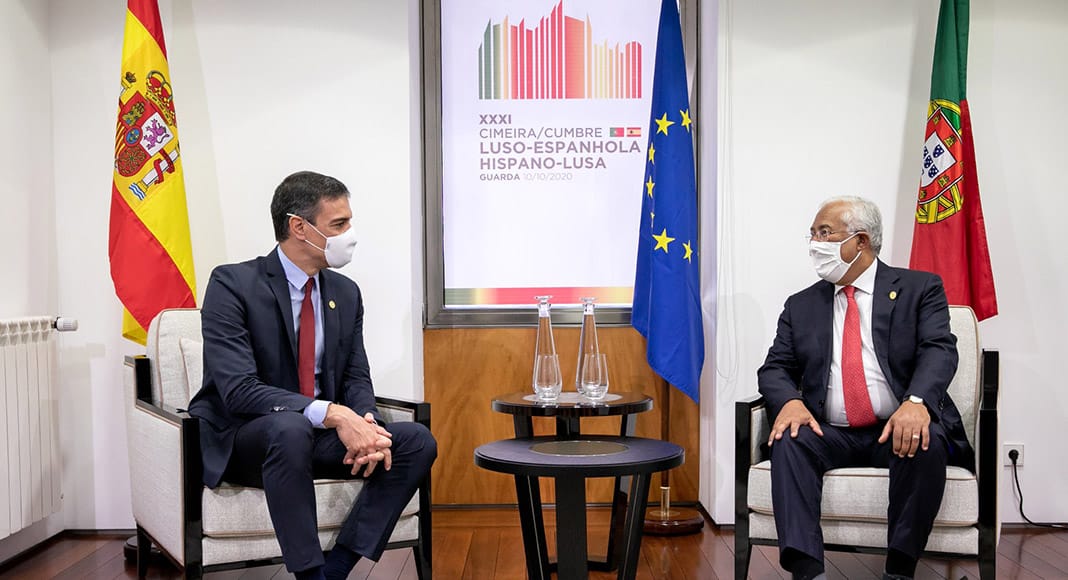 To the delight of thousands, Portuguese PM António Costa and Spanish counterpart Pedro Sanches pledged last weekend to maintaining open frontiers, in spite of the pandemic’s rising case numbers. But the pair went further, and appear to be planning a ‘shared strategy’ for economic recovery involving green hydrogen, lithium extraction and 5G.

At the 31st Iberian summit held in Guarda last Saturday, Mr Costa even mentioned the potential launch of a high-speed rail connection (but stressed this could only come up for serious deliberation post-2023).

For now we have the spectre of a ‘joined-up approach to economic recovery’ by ‘Iberia’, not two countries separated by the longest uninterrupted border in the European Union (all 1,214 kms of it).

Said Mr Costa: “We don’t want the frontier to be a point of separation, rather one of union”.

Said Diário de Notícias, cooperation will stretch to all kinds of areas, including health. If, for example, someone needs an ambulance on the Portuguese side of the border, and the nearest ambulance available is in Spain, “the patient will be attended by the health system of the neighbouring country”, and vice-versa.

Regarding the ‘development of technological products based on lithium’, DN stresses that it makes sense that the Iberian base for such a centre “should be in a frontier region”, so “that as with hydrogen, Portugal and Spain could supply the rest of Europe”.

DN adds that in the case of 5G, Portugal and Spain are already “finalising the development of transport corridors between the two countries. At a time when the United States has called attention to the possibility of Chinese Huawei technology entering Portugal, the leader of the Spanish government has signed partnership agreements with Telefónica, Huawei, Nokia and US companies”, says the paper.

According to Mr Costa, the “Iberian Peninsula could convert itself to becoming a massive data centre. We want the technologies to reach both countries”.

(This particular aspect of the summit appears not really to gel with the most recent reports on US ‘understanding’ on Portugal’s approach to 5G (click here), but the leaders were ‘on a roll’ and not that forthcoming on every detail…)

Said DN: “Portugal and Spain are united over the future of financial health at the moment in which they are both dealing with a pandemic. Portugal had just registered the highest daily number of cases while Spain is in a State of Emergency. Yet neither is prepared to close the frontiers”. The focus has to be on ‘individual responsibility’, said Mr Costa – meaning everyone must follow government/ health authority advice and guidelines.

Finally, on to the situation of road and rail links, the summit highlighted various new highways planned (Bragança-Puebla de Sanabria; Monfortinho-Moraleja; Vilar Formoso-Puentes de Oñoro; Nisa-Cedillo and Alcoutim-Sanlucar de Guadiana), stressing the issue of train-travel is one that “cannot be so easily fixed”. Since March 17, for example, there have been no nighttime connections between the two countries, which saw railworkers turn up in Guarda to register their discontent.