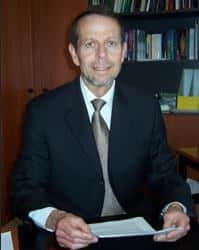 ‘Portugal and Australia are now allies in the war against terrorism’

How did your appointment arise? Tell us about your activities as ambassador.

I’m a career diplomat and have now been ambassador for two-and-a-half years. Our posts are advertised internally within our ministry. I was deeply interested in coming to Portugal. I knew a lot about the country, having first visited in July 1992, and had also followed the issue of East Timor carefully. So I applied and was very pleased to be chosen.

We have a small mission here, comprised of two Australian staff and seven local staff. Most of my time is spent in Lisbon, but I also travel and meet Australians throughout Portugal, in Porto, Coimbra and the Algarve. I have discussions with the Portuguese government on European Union issues but also on the war against terrorism, human rights, Iraq and Afghanistan.

My job is to ascertain Portugal’s stance on these issues and, where necessary, advocate Australia’s position. I also meet socially and informally with other ambassadors to exchange views and compare notes.

Do you have family here?

My wife is here. Until November last year, our youngest son was living here. He did his International Baccalaureate at St Julian’s School in Carcavelos, a very worthwhile and beneficial experience for him. He enjoyed it greatly and did very well. He’s currently studying for a Bachelor of Commerce degree at Sydney University.

Why was there no Australian Embassy in Portugal between 1992 and 2000?

We closed the embassy in 1992 in Lisbon, and in one or two other capitals, for budgetary reasons at that time.

Was that related in any way to disagreements over the question of East Timor?

Not directly, but relations between Portugal and Australia were certainly strained over the issue of East Timor.

What was the source of the longstanding feud?

In late 1975, after Portugal had withdrawn from its former colony of East Timor, Indonesia became troubled by what it saw as an unstable enclave of potential communist orientation within its territory. It took the serious step of invading the former Portuguese colony and annexing it as part of Indonesia.

At that point, relations between Portugal and Indonesia were severed. But relations between Portugal and Australia were also under considerable strain for the next 25 years. This was because of what Portugal regarded as Australian connivance with Indonesia in occupying East Timor. What caused particular difficulty was the signing, in 1989, between Australia and Indonesia, of the Timor Gap Oil and Gas Reserves Treaty, an accord that Portugal regarded as invalid.

How did relations subsequently improve?

Following President Suharto’s resignation in 1998 – and the coming to power of new leader Jusuf Habibie – the Indonesian government decided it would reconsider the future of East Timor. It held a referendum in September 1999, one that was characterised by considerable bloodshed. The United Nations then sent in a force, comprised of a significant number of Australians, to restore order and stabilise the situation. East Timor voted massively in favour of independence, something that was formally achieved in May 2002, after a transitional UN administration.

So, ironically, the key reason for re-opening in 2000 was the resolution to the East Timor question. Of course, Portugal and Australia are now allies in the war against terrorism and co-operate very strongly on the question of East Timor.

Tell us about migration and trade between Portugal and Australia.

There are about 35,000 Portuguese in Australia, mostly in big cities like Sydney, Melbourne, Wollongong, Newcastle, Perth and Fremantle. Many went to Australia in the 1960s, especially from Madeira.

Today, the Portuguese presence is particularly prominent in suburbs of Sydney, where you will see delicatessens selling bacalhau and pastéis de nata, a ‘Little Portugal’ of sorts!

Two of the most famous Australian residents of Portugal are winemakers Peter Bright and David Baverstock (responsible for Sir Cliff Richard’s red wine, Vida Nova), both living in the country for more than 20 years.

Tourism and education are two areas we are currently targeting. We want to encourage the Portuguese to visit Australia for holidays and we also want Portuguese youngsters to study there.