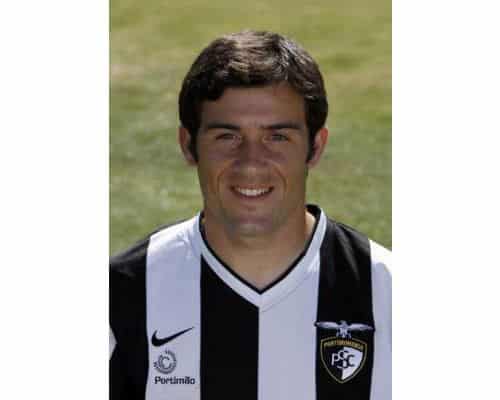 Portimonense captain Ricardo Pessoa (pictured) celebrated his record 300th appearance for the club in style last Sunday morning.
The 32-year-old defender who arrived in the Algarve from Vitória de Setúbal in 2005 made his usual solid contribution to a well-balanced match with high-flying Benfica B, which ended in a 2-2 draw at the municipal stadium.
The visitors from Lisbon gained an early advantage when Helder Costa latched onto a through ball from Nelson Semedo to beat Ricardo Ferreira in the Portimonense goal eight minutes into the game, but the home side were soon level as Zambujo headed in a Pessoa cross.
Kanazaki was then thwarted by Benfica keeper Bruno Varela before Fabricio spectacularly headed past Ferreira in his own goal to hand the visitors the lead once more, seconds before the interval.
Undaunted, Portimonense continued to go forward as the second half got under way and were duly rewarded 20 minutes later when Zambujo took advantage of disarray in the Benfica area to double his personal tally and tie the match.
Pessoa had the chance to secure all three points before the final whistle but his powerful drive narrowly whistled past the opposition’s goal post.
Now in 11th place but only six points off one of the two promotion places, manager Vitor Maçãs’ men next travel east for Sunday’s 3pm Algarve derby with Olhanense.
By SKIP BANDELE