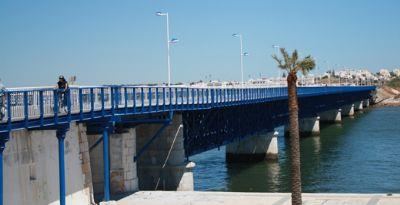 Under the watchful eye of a pair of storks, Portimão’s old bridge, which links Lagoa and Portimão councils over the river Arade, was expected to reopen on Wednesday at 11pm, following restoration works that lasted 22 months and cost five million euros.

The end of the refurbishment works on the bridge was due to be celebrated with a large Feijoada (bean stew), which was to be served to the population from the bridge at 6pm on Wednesday.

Built in 1876 and measuring 332 metres in length, the bridge registered average daily traffic of 5,000 vehicles when it was closed in November 2007, following a damming inspection by the national highways agency, Estradas de Portugal  (see the Algarve Resident edition, November 9, 2007).

Restoration work on the bridge included repairs to the support pillars, a new surface and an enlargement of the surface for vehicles by 60 centimetres, among other work.