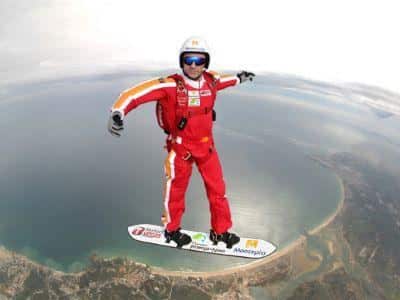 The Portimão Skysurf Protour 2009, held in conjunction with the Portugal Parachute Cup, is the big attraction at the municipality airfield between Alvor and Penina this weekend.

Spectators are invited to follow the action taking off from 9am on Saturday high up in the sky or on a specially erected giant screen while bouncy castles make sure small children also have their fun.

Sunday’s prize-giving ceremony will be preceded by a further highlight as female marshals aged between 17 and 27 recruited locally are invited to take part in ‘Miss Pro Tour Portimão’ and ‘Miss Simpatia’ beauty pageants.

A member of the watching public can also find him or herself among the winners by coming up with the most original sentence containing the words ‘Portimão’ and ‘SkySurf’ for which the first prize is a free tandem jump with Portuguese skydiving champion José Veras.

The event is organised by Sky Surf Productions together with the Portuguese Parachuting Federation. Évora in March and Proença-a-Nova in May and October will host further stages of the Skysurf Protour.