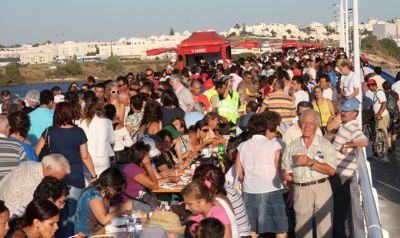 More than 2,500 people celebrated the reopening of Portimão’s old bridge with a giant bean stew dinner on the structure on July 15.

Among the crowd at the opening ceremony were the mayors of Portimão and Lagoa councils as well as Portugal’s deputy secretary of state for public works and communication, Paulo Campos.

During the festivities, Portimão mayor, Manuel da Luz said that he considered the works to the bridge to be fundamental and worth the inconvenience that it caused all users, in the name of safety.

The bridge re-opened to the traffic at 11pm, following 22 months of renovation works.