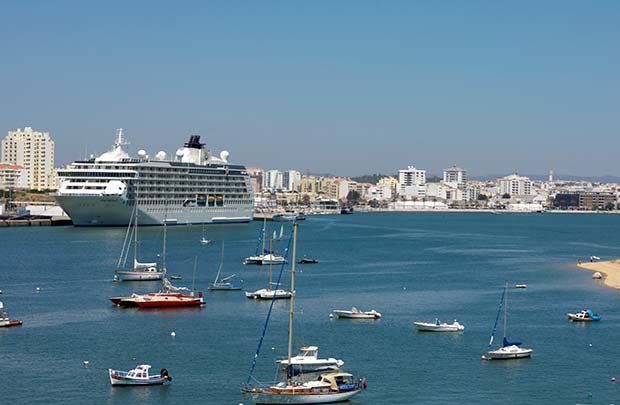 The Portuguese government is investing €17.5 million in dredging and expansion work at Portimão port to bring larger cruise ships and far more tourists to the sunny southern town. The works are expected to be completed by July 2020. Mayoress Isilda Gomes says the news is “great not only for Portimão but the whole Algarve” as it will help the port become a bigger and even more important gateway to the region.

The project was announced via the government’s official newspaper Diário da República on Friday (November 24).

The bulk of the works will involve widening the port’s access canal and turning basin and carrying out dredging work, as the silting of the port is a well-known problem and has caused issues in recent years with larger cruises.

Plans are also to equip the port with two quays (330m and 180m) long enough to welcome the larger cruise ships.

The number of cruises docking in Portimão is also forecast to grow from today’s 50 per year to 190.

Works will be carried out by the Sines and Algarve Port Administration (APS) and covered by community and state funding.

Once they are completed, the port will be able to welcome cruise ships that are 272 metres long as opposed to the current 215m limit, making the port even more cruise-friendly.

Portimão mayoress Isilda Gomes told us that the new and improved port will have a huge impact on the borough’s tourism sector.

“This is huge news, not just for Portimão but the whole Algarve. Faro, Monchique, Silves… the whole region will benefit from more people arriving here. The port will become an even larger gateway for tourists to explore the region.”

She also sees it as a sign of the “state acknowledging the importance of Portimão and its port”.

But will large-ship cruise lines look to Portimão with eager eyes?

“I spoke with the head of a big cruise company not long ago who has guaranteed that he will bring larger ships to Portimão as soon as the port’s expansion works are completed,” Gomes said.

“Now it is up to us to try and find ways to bring these passengers into town to discover Portimão and the rest of the Algarve,” she told us.

Gomes believes that cruise passengers can become ‘regular customers’ at local stores and restaurants, helping them stay open for winter.

“We want to create routes that will bring cruise passengers to our historic centre. There are so many beautiful things to see – traditional things like chimneys, old architectural traits …”

The council wants to lure them to Portimão centre with the promise of discovering the old town and often forgotten side of what is one of the Algarve’s most popular tourist destinations.

According to its website, Portimão port expects to welcome a total of 83 cruises until the end of November 2018.

Most of them are due to arrive from Lisbon, though many others will also be coming from Morocco, Spain, Gibraltar and the UK.

Isilda Gomes also told the Resident that Portimão council is in negotiations with the state to be given jurisdiction over the town’s riverside area, which is currently in the hands of APS.

One of the political promises of her campaign during last October’s local elections was the “upgrading of Portimão’s riverside, namely by creating new garden and leisure areas, installing shading and regulating booths for boat trip companies”.

“Before we come up with any kind of major project, we want to hear the people of Portimão. We do not want to do something that they won’t agree with but that tourists would like, and vice-versa. What we want is for there to be movement along our riverside,” Gomes told us.

But, according to the mayoress, it will be a few years before the negotiations with the state reach a favourable outcome.