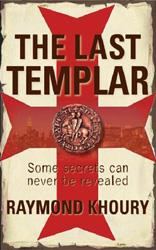 THIS WEEK sees the appearance of two popular books in paperback.

The first, The Last Templar by Raymond Khoury, like Shadow of the Wind, which Khoury admires tremendously, was one of those titles whose reputation spread by word-of-mouth recommendation. As the title suggests, it deals with the Knights Templar, which seems to be a very topical theme at the moment.

Acre, 1291: as the burning city falls to the Sultan’s men, a lone galley escapes out to sea, carrying the young Templar Knight Martin of Carmaux, his mentor Aimard of Villiers, and a mysterious chest entrusted to them by the Order’s dying Grand Master. Present day, Manhattan: Four masked horsemen, dressed as Templar Knights, emerge from Central Park and ride up to the Metropolitan Museum. They don’t stop at the steps, but steer the horses through the crowds gathered for the gala opening of a major exhibition of Vatican treasures and storm into the museum, scattering the great and the good of Manhattan society. Caught in the brutal mayhem, archaeologist Tess Chaykin watches in silent terror as the leader of the horsemen homes in on one piece in particular, a strange geared device. He utters a few cryptic Latin words as he takes hold of it with reverence, before leading the horsemen out and disappearing into the urban nightscape of Manhattan.

The FBI’s investigation team is led by Sean Reilly, an anti-terrorist specialist as well as a practising Catholic, aided by his long-time partner Nick Aparo and a Vatican envoy, the monsignor De Angelis. As the horsemen’s dead bodies start turning up and the importance of the stolen device becomes ever more apparent, Tess becomes more than a witness to the event. She and Reilly are drawn into the dark, hidden history of the crusading Knights, and of the last surviving Templars’ fateful journey from Acre to the pyres of Paris. They’re soon facing the deadly forces battling to recover the lost secret of the Templars, and find themselves propelled into a dangerous adventure. This journey takes them through the cemeteries and sewers of Manhattan, across continents to desolate Turkish mountains and remote Greek islands, through a Mediterranean storm of biblical proportions and into the very heart of the Vatican.

Khoury first wrote The Last Templar as a screenplay 10 years ago, when he was just starting out. It was only the third screenplay he’d written, and those he showed it to were of the opinion that it would make a great book, giving him the chance to develop the ideas that you can only point to in a movie. It sat on the shelf while he built his screenwriting career (Spooks is one series he writes for) until he was prompted once more by a publisher friend to sit down and write it. He has produced a fast-paced exciting story, which may well yet become the movie he wouldn’t compromise on earlier.

The second title comes from a very popular author, Donna Leon. Her series, set in Venice and featuring Commissario Brunetti, has grown in popularity since the early days and the latest to be issued in paperback is Blood from a Stone, the 14th of the series.

Blood from a Stone deals with the problem of immigration in Venice. There are many, hundreds probably, of illegal immigrants from Senegal known as vú cumprá because they say ‘vú cumprá?, vú cumprá?’ which means ‘Do you wanna buy?’ They sell bags from designer brands such as Louis Vuitton, Missoni and Gucci, which are fake and cost whatever you can bargain the price down to.

On a cold Venetian night shortly before Christmas, a man is killed in a scuffle in Campo San Stefano. The closest witnesses to the event are the tourists who had been browsing the man’s wares before his death – fake handbags of every designer label – but they have seen nothing that might be of much help to the police. When Commissario Brunetti arrives on the scene, he finds it hard to understand why anyone would murder an illegal immigrant. They have few social connections and little money – in-fighting is the obvious answer. But once Brunetti begins investigating this unfamiliar Venetian underworld, he discovers that matters of great value are at stake in the immigrant community … The more he investigates, the more he encounters evidence that it is something other than what people wanted to believe. What’s more, there is a significant attempt at a cover-up of the murder of this black street vendor. Why?

Leon’s novels have been praised for their ability to place their readers into the thick of contemporary Venetian life. She skilfully uses her good Commissario, his family and his colleagues to make political and social statements about Italy and global problems. By a confirmed master storyteller, Blood from a Stone is a pitch-perfect mystery, an alluring portrait of contemporary Venice, and an elucidating eye into the attitudes of a timeless place in the grip of change.