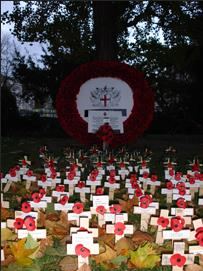 EVERY REMEMBRANCE Sunday, local Members of the European Parliament are invited to dozens of different services across the West Midlands. As we cannot be in all 60 Westminster constituencies that make up the region, we each have to choose. The fact that last year Rugby was the only one to offer rum in the hot coffee afterwards had of course no influence on my personal choice.

Wherever we go, the two-minute silence, the solitary bugler and the laying of wreaths always make for a moving occasion. The sea of bright red poppies confirms the pledge made each November, that “we will remember them”, is a commitment that binds us all.

Twelve months ago, a French MEP had stopped me in Brussels asking why I was suddenly wearing this strange red flower on my jacket. Although 30 million such poppies are seen each year in the UK, he had personally never seen one before. When I told him, he said: “Does this not annoy the Germans, reminding them of their defeat?” I replied that I obviously had not explained matters very well.

The poppy does not trumpet victory, nor does it glorify war. It serves very simply for us to remember those very special people, particularly from our own nation, who gave their lives for their country for the defence of the freedom we now enjoy. It also raises substantial funds for the needs of their colleagues who survived.

The Royal British Legion has some half a million members in nearly 3,000 branches. Members are involved in fundraising and welfare work on behalf of the four and a half million ex-Servicemen and women and their six million dependents. Although the numbers reduce each year, the needs of those who remain grow greater with age.

The Legion currently spends over 50 million pounds Sterling a year providing a wide range of welfare assistance to the ex-Service community. First launched in 1921, today well over 20 million pounds a year is raised directly from the Poppy Appeal: the balance comes from donations, special events and legacies.

The poppy emblem comes from the fields of Flanders in Belgium where so many died in the First World War, which ended 90 years ago this year. Despite the land being laid waste, poppies still bloomed, bringing colour and hope to the blighted landscape and proving that life goes on. Our tradition of Poppy Day is still shared in Belgium. It is shared nowhere else in Europe.

Some of us don’t like the principle of standardising everything across the EU – but standardising the poppy, the remembrance and the welfare work would surely be a welcome move. It would be good to spread the message, and spread the poppies.