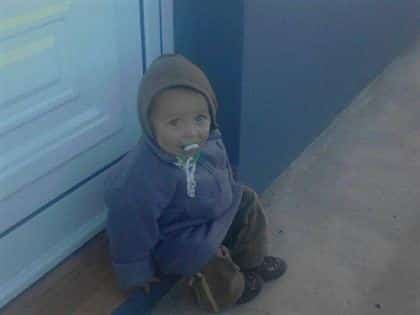 A PSP officer is in hot water for posing for photographs with ‘missing’ Madeira baby Daniel Abreu moments after the little boy was found. The policeman then apparently tried to sell the shots to the media.
The photos showed him smiling into the camera in full uniform holding a confused Daniel in his arms.
The PSP’s regional command has now opened an investigation into the unorthodox behaviour.
Diário de Notícias claims it could constitute a “serious disciplinary infraction” as it “exposed the minor to illicit photography”.
The paper went on to say that the officer, who works locally in Calheta, vowed that the money he made would all be going to the family.
The photos eventually appeared in the Tribuna de Madeira weekly newspaper, under the headline: “A happy ending enveloped in mystery”, and mystery indeed remains the order of the day.
Daniel has finally been released from hospital where he had been undergoing tests, and newspapers now say the Madeira government will be offering the little boy’s hard-up family €15,000 to repair their home. It’s a promise that has been met with incredulity from Daniel’s grandfather who told Correio da Manhã that people had known of their problems “for years” and never offered help of any kind.
“We will just hope it isn’t another promise that nobody keeps,” said Agostinho Abreu.
Meantime, Polícia Judiciária detectives have reportedly “identified” the person suspected of having snatched Daniel from his family, but as yet no further details have been released.
Daniel Abreu, 18 months old, was reported missing by his family on January 19. He was found three days later near an irrigation canal, a couple of kilometres from where he disappeared.
Photo: A picture of Daniel Abreu posted by relatives on Facebook when he went missing