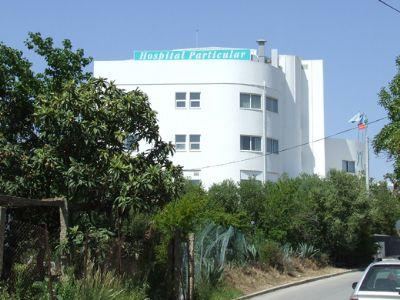 An armed robber was shot by the GNR on April 30 as he fled Alvor’s private hospital in a stolen car following the attempted robbery of an ATM in the building’s reception area.

According to Portuguese newspaper Correio da Manhã (CM), a gang left the Bela Vista estate in Setúbal, near Lisbon, before carjacking a black BMW and heading to the Algarve where they attempted to rob the ATM.

The nearest GNR patrol rushed to the Hospital Particular do Algarve after a receptionist raised the alarm at around 6am.

A GNR spokesman told the Algarve Resident: “There are conflicting statements as to whether there were three or five robbers, however according to the witness statements, they were armed and had their faces covered.”

After the robbery, the driver of the BMW attempted to evade police leading to shots being fired by the GNR at the suspect.

Meanwhile, the driver lost control of the BMW and crashed into a wall.

He was taken to Barlavento hospital in Portimão where doctors stabilised his condition before he was air lifted to Lisbon’s São José hospital, where he later died.

“Although shots were fired by the GNR, we are unable to confirm whether the suspect’s death was as a result of a gunshot wound or from injuries sustained in the accident.

“A coroner’s report is likely to confirm this,” said a GNR spokesman.

A second member of the gang, a Portuguese man, who escaped on foot, was caught by the GNR around two hours after the incident occurred, before being taken to Lagos court on Saturday, May 2, where he was placed under arrest.

The other gang member or members are yet to be detained and the case is now being investigated by the Polícia Judiciária.

A spokesman from the private hospital told the Algarve Resident: “The security guard had identified a suspicious vehicle before the suspects even entered the hospital, and in doing so, he had activated our emergency security plan, ensuring the safety of all our patients and staff.

“This plan included a call to the GNR who sealed off the hospital’s perimeter within minutes of being alerted, as well as nurses closing the doors to patients’ rooms to avoid possible hostage situations.”

The spokesman added that the hospital’s security plan functioned well but the ATM machine may now be placed in a different location.

This was the first robbery at the hospital since it was opened in 1996. The ATM had been in the reception area for around six years.