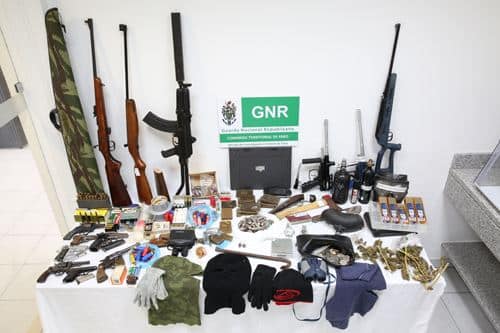 The day before international news media covered the story of authorities in Australia rounding up jihadists said to be planning gruesome terrorist outrages, police in the Algarve swooped on the house of a suspected jihadist and discovered a stash of illegal weaponry and drugs.
Diário de Notícias carried the story to stress how seriously Portugal’s law enforcement is taking the “faceless threat” of international terrorism.
It all started with a gun thrown out of a car that the GNR was chasing near Paderne, said the paper.
Then came the surprise, during searches of the suspect’s house in Ferreiras, of graffiti on the garage wall with the word “Jihad” and the book “Osama Bin Laden, the Strategy of Terror”.
There was no concrete evidence that the man “was entering a process of terrorist radicalisation”, a source told the paper, but because of the international context – and because Portugal is known to have a number of citizens fighting for the Islamic State in Syria – police took no chances.
“The criminal investigation unit of Paderne GNR apprehended an arsenal of weapons at the house: an automatic rifle with silencer; two revolvers; a rifle; four pistols of different calibres; an airsoft gun; a paintball gun; two airguns; a can of pepper spray; a sword; a knuckle-duster and various calibre munitions.
“Also apprehended was enough narcotic product for 10,314 individual doses of hashish and 70 of marijuana, as well as other objects allegedly used in criminal activity – namely precision scales, three balaclavas, two pairs of binoculars and a crowbar”.
While DN claims that PJ police and SIS (security service) consider the jihadist link tenuous, they have now set about trying to analyse the situation.
Since 2013, SIS has been monitoring “around 10 jihadists with Portuguese passports”, all of whom have gone to fight for the Islamic State’s army in either Mali, Syria or Iraq.
SIS has “carried out identical attention” over the movement of nationals on “jihad stages”, particularly when these coincide with regions where Al-Qaeda and its affiliates “seek to reinforce their position”, adds DN, quoting directly from the security service’s annual report.
“According to this document, Islamic terrorism is one of the threats to Portugal’s internal security,” writes the paper.
Security sources have also confirmed to Expresso that certain national jihadists have temporary residence abroad, although they are all known to have social and family connections in Portugal.