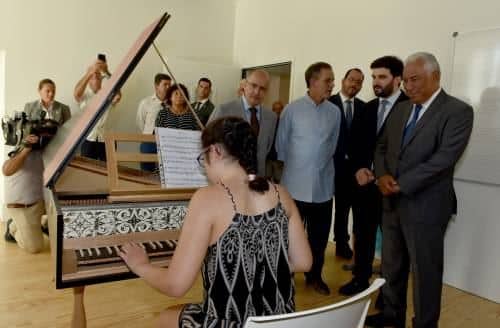 Prime Minister António Costa was the guest of honour at last week’s inauguration of Loulé’s new public music school, the only such establishment located south of Lisbon.

The school can be found in the town’s emblematic Solar da Música Nova building, once set to become a residence for science students and researchers. However, the idea was scrapped in favour of the current project due to the manor’s “historic link to music”.

The building’s renovation cost just under €3 million and was carried out by the local council, while the hiring of teachers and staff was the responsibility of the Ministry of Education.

“Inaugurating the first public music school south of the Tejo River is a huge honour and a very important sign that the country is changing. This is the path that we want to follow,” said the prime minister at the inauguration ceremony.

“In 1971, I had the privilege of taking part in the first experience of integrated artistic education that there was in Portugal. It is telling of how changes take a long time to happen.”

As he explained: “Artistic education didn’t make me a musician or a dancer, but it taught me how to feel, and that is extremely important.”

Also attending the ceremony were the Minister of Education, Tiago Brandão Rodrigues, and Secretaries of State for Education, Alexandra Leitão and João Costa.

“It’s a huge honour to mark the start of this school year in the presence of the Prime Minister and Minister of Education,” said Loulé mayor Vítor Aleixo.

He praised the renovation of the building, which was “rundown and the image of urban decay”.

“With this refurbishment, we have a magnificent building which is now the town’s music conservatory and the headquarters of the Banda Filarmónica Artistas de Minerva.”

The music school is named after one of the town’s most important figures in music education, Francisco Rosado.

Aleixo also stressed that the “education of the many thousands of young people who will study at the school is much more valuable than the €2.8 million that the renovation works cost us”.