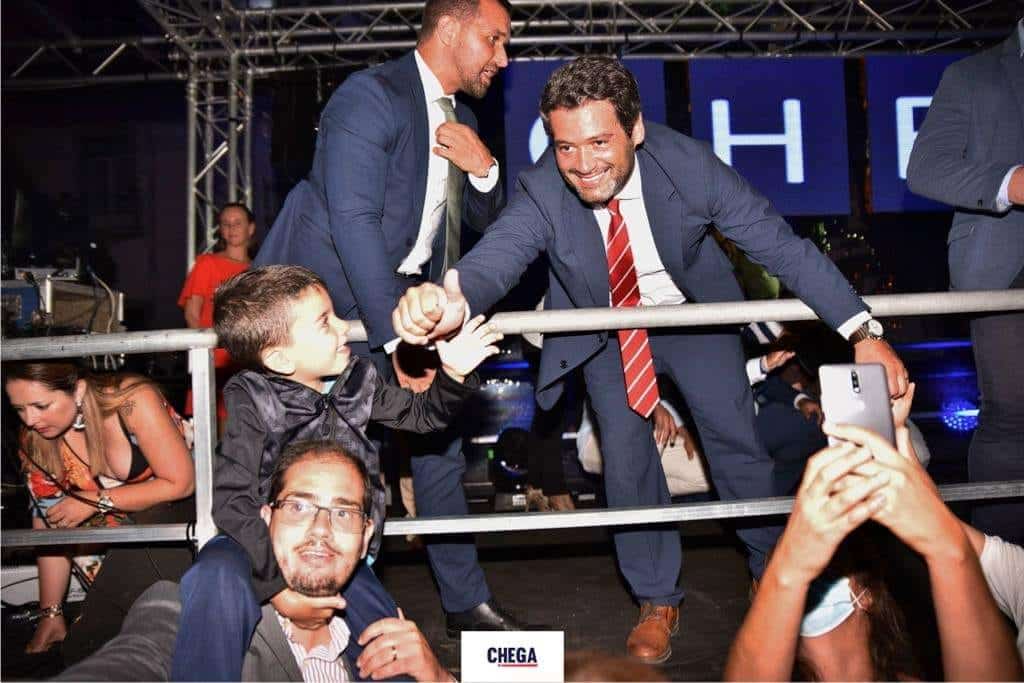 PM António Costa has been accused of ‘fraud’ in ‘liberating Portugal to close to the municipal elections’(taking place on September 26).

The criticism came from Chega MP André Ventura, in the throes of ‘electioneering’ initiatives carrying on up and down the country.

The right wing politician famous for ‘not pulling his punches’ told a political rally in Albufeira this week: “It looks like we’re living in a Wonderland that will be receiving millions from Europe and that Covid has disappeared…

“Suddenly and miraculously, 20-odd days before the municipal elections, there are no more admissions to hospital; the evening news bulletins don’t open with numbers of dead from Covid-19…(This is) one of the biggest political frauds in recent times”, he railed – warning “sooner or later” the Portuguese public will pay dearly for this decision.

“António Costa is very skillful, and has in fact achieved this extraordinary thing, which is, luckily for the Socialist Party, just when the elections that interest him start to arrive.

“Suddenly people are talking about no longer having to wear a mask, restaurants can reopen, sectors can all function … no one is interested any more in the Rt number, even less in incidence levels, mortality – or hospital admissions”, the MP continued.

Elsewhere, television reports have indeed been broadcasting the fact that the law governing the wearing of masks in the open air (‘in the street, when physical distancing is not possible’) is unlikely to be renewed when it ‘lapses’ on September 12.

Chega’s criticism wasn’t limited to the prime minister however: it rounded on PSD parliamentary leader Rui Rio and his CDS counterpart Francisco Rodrigues dos Santos – accusing both for having ‘withered’ the strength of opposition to the point their parties have no hope of wrestling back power.

Neither leader has “done his job”, he claimed.

For the many citizens who feel politicians across the board have let them down, it was ‘rabble rousing’ stuff: vintage Ventura – winding up with habitual bravado: Chega is the only party that “can guarantee a right-wing government”, Ventura thundered: the road to success starts with these local elections, in which the party is fielding hundreds of candidates.

André Ventura’s ‘appeal’ is Chega’s trump card: he is still the personification of the little party. But what he said in Albufeira wasn’t ‘just political’: there may have been some truth in his warnings.

Today, the Portuguese Lung Foundation (Fundação Portuguesa do Pulmão) is also saying it is “premature to abandon the obligation to use a mask for respiratory protection, and other measures of individual protection against propagation of the Covid-19 pandemic”.

In a statement sent to Lusa, the institution warns: “In spite of undisputable progress we have made in the combat of the present pandemic, especially following the success of the vaccination campaign, the respective epidemiological situation advises that a robust level of preventative measures should be maintained”.

Says SIC today, “the foundation maintains that the Delta variant with a capacity for contagion 60% higher than previously, and knowledge that the vaccine is not effective enough to completely prevent either infection or transmission of the virus, justify further measures”.

The institution highlights as “non-reassuring” factors:

Bottom line, says the foundation, it is ineed too soon to remove the rules about mask wearing in public spaces – and they definitely should not be relaxed in indoor situations.