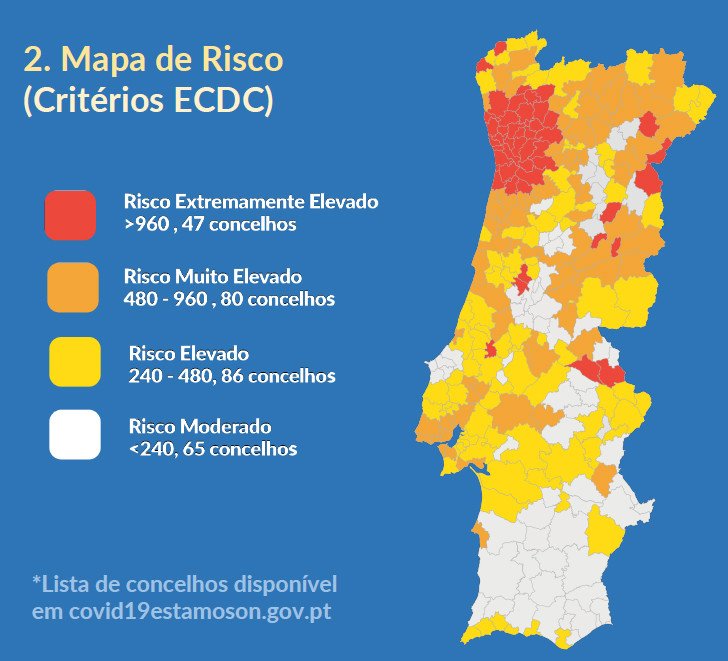 PM António Costa has announced new restrictions for this latest State of Emergency as over 8 million Portuguese hear they face further weekend lockdowns.

Upcoming December Bank Holidays (falling on Tuesday December 1 and 8) will see the whole population confined to their boroughs of residence for four days each time – the idea being to limit circulation as much as possible.

The chances of a ‘more free Christmas’ are also looking slim, though the PM refused to ‘anticipate’ how the virus situation could have developed by then.

Weekend limits on circulation (starting at 1pm on both Saturdays and Sundays and lasting until 5am the following day) apply to 127 boroughs classified as ‘very high’ or ‘extremely high’ risk.

None of these boroughs are in the Algarve, which in the main is classified as ‘moderate risk’ (with the exception of Vila do Bispo, Lagos, Lagoa, Portimão, Albufeira and Faro which are all now considered ‘high risk’).

But new measures applicable to everyone – no matter where they live – mean that masks must now be worn in all workplaces.

The requirement for ‘remote working from home’ is now also to be ‘more thoroughly checked’ by authorities in very high and extremely high risk boroughs, said the PM, as there has been ‘a lot of abuse’ in this regard.

Focus within the announcement centred on the upcoming Bank Holidays in December.

Said Mr Costa, restrictions in place up till now have to a certain extent reduced the transmission of infections (numbers have been declining since the middle of October). But the reduction is still far from satisfactory: hospital admissions are still too high (indeed there are more people in hospital now, and in ICUs, than there have been at any other period during the pandemic). Deaths too are running high – and are expected to continue to do so for the next couple of weeks, hence the need for these ‘added new restrictions’.

The masterplan involves early shutdowns of restaurants and shopping malls (at 3pm) as well as the day off for schools and public administration on the eve of each Bank Holiday (ie on November 30 and December 7) – irrespective of the fact that on these days all residents will already be ‘confined’ to their boroughs of residence.

Said the PM, the idea is to “keep December as calm as possible”. This obviously led to questions from journalists about Christmas, to which Mr Costa admitted that he would be “very surprised” if Christmas happened outside yet another declaration of a State of Emergency.

The press conference followed an interview earlier in the day with health minister Marta Temido who simply stressed the dire situation the country is in. Pressure on the health service is critical, she said, but it has not (yet) reached the situation of ‘rupture’.

“Until there is a vaccine, the problem will not be over”, the PM stressed. “This is a long term battle, a really difficult marathon”.

Indeed he anticipated either a “very long second wave” or a succession of waves until such time as a vaccine becomes available and people have more protection.

As commentators have since remarked, it was a confusing list of restrictions, particularly in terms of what people can and cannot do, but the government has updated its https://covid19estamoson.gov.pt/ information website, and it does give an English translation as well as confirmation of which boroughs are classified under which category.

Further measures of financial support are also planned and will be announced by economy minister Pedro Siza Vieira next week. Said Mr Costa, these extra measures of support (amplifying those already in place click here) will be focused on helping restaurants and commerce in the worst hit boroughs which have been and will continue to be “seriously impacted” by restrictions.

For now there has been little ‘reaction’ to the new measures, though tomorrow will see ‘slow marches for liberty’ in Lisbon and Porto, after a day in which restaurateurs, shopkeepers and many others have already been demonstrating in various parts of the country.

TV commentator Bernardo Ferrão has however been quick to question the ‘scientific basis’ for these new restrictions – bearing in mind that a recent meeting with Infarmed (medicines authority) revealed that in 81.4% of cases it’s impossible to tell where people actually became infected.

Ferrão told SIC that there still seem to be ‘serious contradictions’ at play. For example, according to Infarmed, gymnasiums and workplaces hold much higher risks for contagion than restaurants or shopping malls, yet the latter are being massively impacted.

There is also the issue of an upcoming PCP congress, scheduled to take place in Loures – a borough classified as having ‘very elevated risk’ (ie over 960 cases per 100,000 inhabitants). PM Costa has explained that a law dating back to 1986 means the government has no power to prohibit the congress. Ferrão suggests it’s not a question of what is legitimate, but more how people will view the congress taking place in these very serious circumstances.