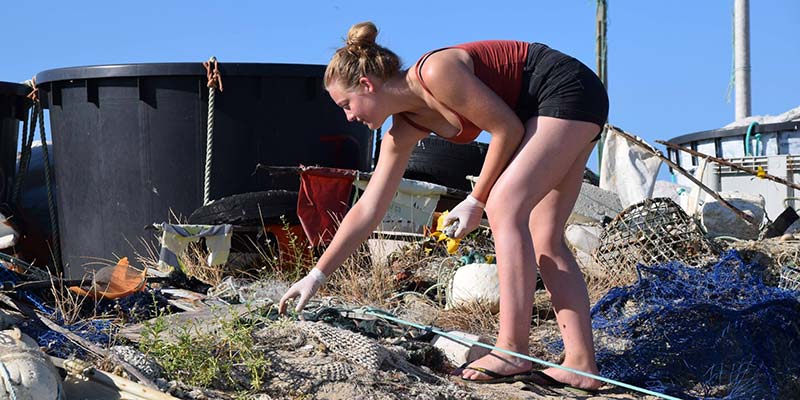 A project that envisions a “plastic-free Ria Formosa” is among the five finalists of an international competition organised by the European Outdoor Conservation Association (EOCA).

The competition is held every year to decide which projects should receive financial support from the association. Voting is open to everyone until April 11.

The project was created by the Algarve-based association aECO (Association for Ocean Studies and Conservation), which says that the nomination is “already a victory as it brings great visibility to the Ria Formosa, the Algarve and the country”.

But achieving international visibility was not the main goal.

“We carry out clean-ups on the barrier islands every year. With the touristic pressure and other commercial activities that take place here, constant intervention is needed. This year won’t be an exception, no matter the results of the voting,” said Sandra Godinho, one of the members of the association.

“Our goal in this competition is to expand the clean-up that will take place in July, both on land and at sea. With this funding, we will be able to carry out an underwater clean-up. We need professional swimmers to remove old anchors, remains of fishing equipment and other debris that is accumulating at the bottom of the Ria Formosa,” she adds.

The project also aims to use “technical means, with the support of the University of the Algarve, to monitor and analyse the evolution of the estuary’s seahorse population which unfortunately seems to be in stark decline”.

On the competition’s website, the project’s description reveals that “funding will also enable an awareness campaign to tackle the problem at its source, targeting non-sustainable behaviours such as plastic consumption and littering.

“To engage tourists, residents, fishermen and students, there will be photographic exhibitions in the main cities of Olhão and Faro, art installations made with the rubbish collected, in-store communications in selected supermarkets and shops as well as a digital campaign to broaden the campaign’s impact,” it adds.

Visit http://www.outdoorconservation.eu/project-voting-category.cfm?catid=3 to vote for the project.