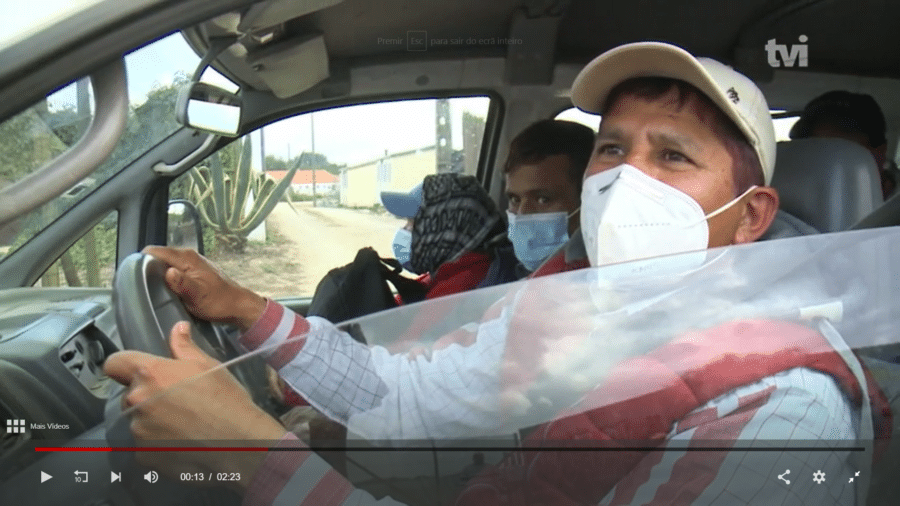 PJ police are investigating networks of illegal immigration and situations of slave labour that have turned the once sleepy Alentejan town of Odemira into the focus of national press attention.

With two parishes of Odemira now in strict lockdowns due to the number of immigrant agricultural workers who have tested positive for Covid-19, the pandemic has finally called time on practices that have clearly been ‘going on for years’.

Ask anyone in the area, and they will tell you: “None of this is new, it is simply that authorities cannot pretend it doesn’t exist anymore”.

Odemira’s council president José Alberto Guerreiro told reporters over the weekend that there is a lot of ‘strange business’ going on in his borough – particularly when it comes to cash transactions to the tune of millions for properties and high-cylinder cars; supermarkets of less than 200 sq metres “that have 30 or 40 (Asian) employees” on their books; spaces for the sale of drinks “with ten times the normal number of (Asian) employees” and clear signs of ‘human-trafficking’.

Today Mr Guerreiro has called for a parliamentary inquiry, saying “this cannot go on anymore. A president cannot remain indifferent to these situations…”

Indeed he claims friends have told him his life could be in danger (for saying what he is saying).

According to Jornal de Notícias,  PJ judicial police are up to speed. “It’s not just because of what the president of the municipality has been saying – the existence of human-trafficking networks and slave labour is being investigated by the PJ”, says the paper.

SEF (the borders agency about to lose its police powers click here) has conducted “various operations in the Lower Alentejo areas of Ferreira do Alentejo, Aljustrel and Beja – identifying “various victims of human trafficking of foreign origin. Some of the cases went to court and ended in condemnations”.

The latest convictions came only a few months ago, in December of 2020: seven men of Romanian and Moldovian nationality,  aged between 27 and 49, were given jail terms (some of them suspended) for the crime of ‘aiding illegal immigration’. However the panel of judges ruled that the Public Ministry request for confiscation of property in the prosecution was unfounded – and thus the eye-watering total of €7,463,868.40 was “returned to the defendants”.

Says the paper, at a later date 13 of the 26 defendants received jail terms ranging from six to 16 years.

SIC television news admits it is the ‘sanitary issues in Odemira’ (meaning the elevated number of cases of Covid-19) that have at last brought all the other problems to the fore.

But resolving them will be another can of worms. Alberto Matos explains: “Without illegal immigrants the harvesting won’t be profitable”.

Mr Matos is the national director and Beja delegate of the Associação Solim-Solidariedade Imigrante (Solim Immigrant Solidarity Association). He knows that the number of immigrants in the borough of Odemira can reach 20,000. Many arrive in the country “brought by contractors for temporary labour. They have tourist visas and then remain in the region illegally”, he told SIC, describing the immigrants as “authentic slave labour”, and reinforcing the fact that the increase in the number of foreigners in the Lower Alentejo “is directly linked to the borough of Odemira where in 2020 there were 1,500 workers more than in the year before”.

Says JN, “the harvesting of red berries in local greenhouses on the coastal stretch of the borough, in olive and almond groves in Beja and Ferreira do Alentejo absorb the vast majority of the labour force in the district: almost 12,000 workers”.

According to Alberto Matos, this is not simply a local problem. Situations like the one in Odemira exist all over the world: people desperate enough for a ‘new life’ are hired by temporary employment agencies, on low salaries, (accepting) conditions of transport, habitation and even food “that are far from ideal for human beings”.

As this story develops the Portuguese Bar Association has said that the government’s plan to requisition an eco-resort for the purposes of housing local immigrants testing positive for Covid-19 is unconstitutional (click here).