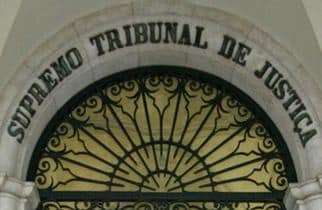 In one of the most bizarre murder cases for a long time, a PJ inspector charged and condemned to 17 years in jail for shooting her mother-in-law 14 times with a police-issue Glock looks set to be absolved.

Attractive Ana Saltão has been in and out of the news since the brutal killing of her 80-year-old mother-in-law in Celas, Coimbra over three years ago.

Initially found not guilty by a Coimbra court, the verdict was overturned on appeal, which Saltão’s defence then appealed again to the Supreme Tribunal of Justice. Throughout this protracted litigation, Saltão has been ‘free’ though on sick leave from her job.

The case has generated a great deal of discomfort within the PJ in Coimbra as detectives have always believed they had their killer, explains Correio da Manhã.

Saltão and her husband were in debt before Filomena Gonçalves was gunned down, and her death “resolved all their financial problems”, said the paper.

With the Glock – “said to have been stolen from the locker” of one of Saltão’s PJ colleagues in Porto – never recovered, the issue of proof rested on the fact that Saltão’s jacket showed gunshot residue, and a wound to her right hand, said the paper.

Saltão has always maintained the wound was caused by a cooking incident.

Now, CM reveals the Supreme Tribunal’s prosecutor Graça Marques has decided the court should absolve the inspector, due to the “impassable conflict between facts proved” which make her condemnation “unviable”.

According to CM, Marques says there was a “notable error” in the appeal court decision that accepted as proved that both defendant and victim had been facing each other.

The autopsy on the dead pensioner’s body showed “there were places where bullets had entered from the side”.

Also there appears to have been an error in the number of entry wounds.

The appeal court accepted 14, says CM, while Marques is understood to be in possession of reports that detail “at least 15”.

Marques is also described as saying “it is not possible to determine motive”.

CM reveals that Marques has a “known friendship” with the Coimbra magistrate Maria João Barata who initially freed Saltão from five-months preventive custody and was later removed from the case.

The friendship is causing discomfort within the Public Ministry, stresses CM – particularly as it looks almost certain that Saltão will be absolved when the Supreme Tribunal’s decision is published next week.