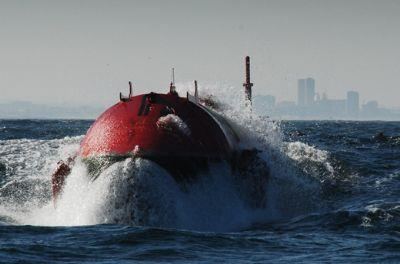 A pioneering Portuguese offshore wave-powered electricity generating project has hit the rocks because the project investors are bankrupt.

Launched in September by Minister for the Economy and Innovation, Manuel Pinho, the nine million euro project, five kilometres off the coast at Póvoa de Varzim, initially got into deep water within weeks because of technical problems.

Taking three years to develop, the wave park was the first project in the world to commercially exploit wave energy, with a 2.25 megawatt capacity, the equivalent of one wind turbine.

Now dismantled at Leixões, it consisted of three articulated snake-like units which lay semi-submerged, undulating with the movement of the waves to generate current.

A senior executive at the projects financial partner, Portuguese electricity giant Energias de Portugal (EDP), Jorge Cruz Morais added: “The machines suffered a hard winter and have been brought ashore for repairs in what is still in the project phase.”

However, now the project’s future is in doubt because its main investor, Australian group Babcock & Brown, has gone under.

EDP says it is still ready to invest in wave power despite “perfectly normal setbacks in a process of research”.