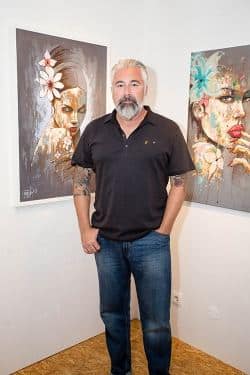 Skip Bandele moved to the Algarve 13 years ago and has been with the Algarve Resident since 2003. His writing reflects views and opinions formed while living in Africa, Germany and England as well as Portugal.

The more I see of a certain politician, the less I believe in Christmas. That came out wrong. The longer I feel proud of myself for having given up the evil weed – its FOUR months now, no relapses – the whiter my teeth appear. The diminishing number of them; they are in recession, like my hair, as is the country as a whole.

It is very expensive to fix them these days. The teeth, not the hair. As eating is becoming increasingly more difficult José Sócrates’ nose is growing. The former Prime Minister, who has never enjoyed an absolute majority, was elected on a ticket promising to make everything better.

His latest austerity measures are leaving countless families homeless, there are record numbers of unemployed and many lucky enough to still be in work are beginning to wonder if it is worth while considering the ever increasing tax burden.

Pinocchio’s nose is growing by the day and I am wondering if a cocaine habit, said to suppress appetite, is the answer. The fact that the latest round of cuts reducing effective law enforcement while leaving certain agencies unable to pay their public employees anything but the bare minimum seems to encourage that theory.

Yes, you have guessed it, it’s my birthday next week and the midlife crisis is taking a firm grip. Let me change the subject before someone has the silly idea of asking how old I will be – with everything going to the dogs I feel like 101!

I just found this ‘Censos 2011’ form in the post – this is the first time in 13 years of being permanently domiciled here that such a thing has arrived at my doorstep leading me to believe that it is either high time I moved on or the others got stuck between Lidl special offers or the latest Pizza Hut temptations.

There are internet address and phone lines boldly displayed to help you or answer online, I don’t know which, but according to the national press and my own experience both are “unreachable”- obrigado!

It also says the failure to respond carries a maximum fine of €3,740, a fact which reluctantly persuaded me to delve into my waste paper basket today.

Ever since I read George Orwell’s 1984 all those years ago – now there is a clue! – I have had this pathological hatred for rats … and Big Brother. I don’t mean the loathsome television anti-spectacle but the equally despicable bureaucrats determined to keep every little detail of our insignificant existences on file.

Looking down at question four of the aforementioned repugnant piece of folded four-sided paper, the state demands to know if I was at home at midnight on March 21.

I won’t tell. I probably was, but what if I was not? What if I was still out drinking, working some night shift or bonking the neighbour? Whose business is that other than mine and Ms Soares?

Next: date of birth. No. Then they go on about ‘de facto’ unions (common law marriages), legal civil state (my solicitor is called Grace, does that count?), nationality (alien!) and reasons why I didn’t work the week between March 14 and 20 – did I or did I have a hangover?

Can’t remember but that option box does not exist … getting ticked off. I’m tempted to put my cross next to “I can’t read or write” for Q14 but then think better of it as I’ve just admitted my main profession to be ‘journalism’- Big Brother trying to catch me out, I see.

As I come to the end, I refuse to divulge my religion or how many people work at the Algarve Resident, facts I am only prepared to reveal under torture or to my priest (please note that this is a deliberate red herring planted here in case Big Brother is clever enough to read these manic scribblings).

As I make my way to our local post box – yes, we still have one – I start thinking about things we can still enjoy in the prevailing economic climate without spending the money we no longer have because the government is extorting it from us in order to pay for at least 25 years’ worth of mismanagement.

Sex is the first thing that springs to mind but then I remember my imminent ‘anniversary’ and ‘spring’ is replaced by the hedgehog’s guiding principle of ‘careful’.

I am past the stage of worrying about frequency, duration or position. Instead I tend to look for comfort, love and security these days, things which are not so randomly accessible and do carry a certain price.

Suddenly (and inexplicably!) the strains of Abba’s Fernando invade my consciousness. Something about “Running away together” or was that the young shepherd boy Angelo?

Whichever, scientists have recently unravelled that our best-loved aria or guitar riff can trigger the same chemical reaction in us as good food, money or sex.

The pleasure experience is driven by the brain chemical dopamine which helps nerve cells transmit signals to each other – best of all, it’s safe and absolutely free so my recommendation is to start humming your favourite song or piece of music whenever things threaten to get on top of you – in fact, do it now.

To close, I would like you to check the date on the cover of this paper. Known as ‘Dia das Mentiras’ in Portugal or ‘April Fool’s Day’ in England, all you need to decide at this moment is to what extent I have told the truth during the preceding 900 or so words, who is the fool and who does or does not merit the description of “Pinocchio”- see you soon!
3″>features