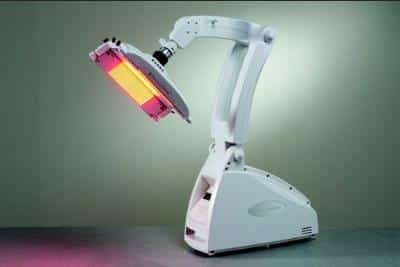 Dr Kirk Groeneweg is a consultant dermatologist at the Family Medical Centre in Vale do Lobo.

Photodynamic therapy (PDT) is a new procedure used by dermatologists to treat certain types of skin cancer. Current evidence shows PDT to be effective in treating solar keratoses on the face and scalp, and superficial basal cell carcinomas. It appears to be as effective as conventional treatments such as cryotherapy (freezing), curettage, topical 5-fluorouracil (Efudix cream) and topical imiquimod (Aldara cream), but with a superior cosmetic result.

Further advantages of PDT are the following: ability to treat large areas (therefore more lesions can be treated at a time), it’s a non invasive technique, suitable for the elderly, there is no toxicity, is well tolerated by the patient and can be repeated several times without any risk to the skin or health in general.

PDT is currently used as a treatment for the following skin conditions:

• Solar keratoses on the face and scalp

The treatment of skin cancers with PDT is performed in our medical centre.

The photosensitising drug is applied to the lesion. The skin may be gently scraped (curretaged) beforehand to increase the amount of the drug absorbed.

Wait between 1½ – 3 hours to allow the drug to concentrate in the cancer cells.

Red light is applied directly on to the treated area.

The treated area is covered with a dressing.

Depending on the type of lesion being treated and the photosensitising chemical used, a second cycle of treatment may be given seven to 10 days later.

A sunburn reaction can or will occur which usually heals within four to eight weeks.

The possible side effects of PDT are the photosensitivity which usually lasts about 24 hours. Side effects may include: burning / stinging sensation, swelling and redness, crusting, itchiness, peeling and blisters, skin infections.

The treated area should be protected from light exposure using a dressing. During the treatment a fan will give relief.

The treated skin lesion may blister and ulcerate as the cancer cells die off. This may take several weeks to heal. Scarring is generally minimal (but can be moderate). Loss of pigmentation may occur sometimes and can be permanent.

Although photosensitising drugs concentrate in cancer cells, they can also make healthy cells more sensitive to light. This is not a problem when photosensitising creams are used, only when it is taken orally or intravenously.

PDT is a new and effective weapon in the treatment of skin cancer with not only very good healing, but also very good cosmetic effects. However, the indication for treatment should always be made carefully and accurately.