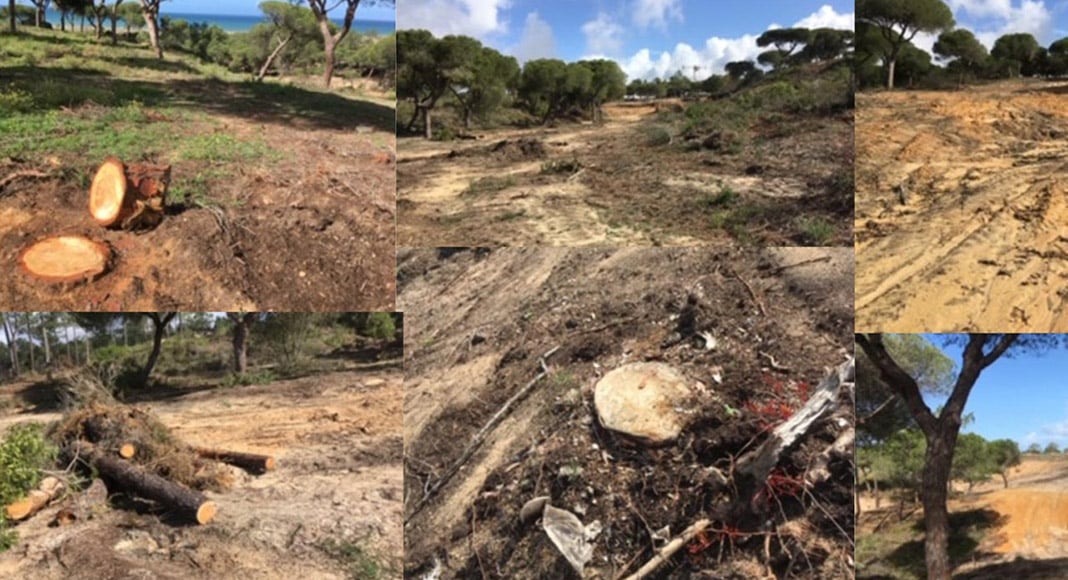 Something’s distinctly off in Praia de Ancão (Loulé borough). Since the ‘environmental attack on centenarian pines’ in the natural park of Ria Formosa authorities that vowed they would ‘see heads roll’ have gone strangely quiet – to the point that residents who raised the alarm in the first place fear something even worse could be coming down the line.

“Our chief concern is that these works have been done to pave the way for new development”, said one. “We’ve heard on the grapevine that there are plans for 50 villas – but we can’t find any proof”.

Loulé borough council, which was caught in a situation of ‘yes we knew about these works’ followed by ‘how could they possibly have gone ahead?! This is an environmental attack that cannot go unpunished” (click here) has failed spectacularly in its pledge in May to ‘punish’ those responsible.

The ICNF . which issued an embargo on the works has failed to ensure that ‘re-planting’ by way of making good the destruction has gone ahead. And Lisfina, the development company that carried out the shocking habitat cull has not only failed to make any attempts at reforestation, but has fenced off the entire area, effectively blocking a well-used, much-prized public footpath.

This whole ‘situation’ on a prime site between the Golden Triangle property havens of Quinta do Lago and Vale do Lobo developed through the Covid pandemic. In a way, the pandemic has helped deflect people’s attentions from what has – and what may be – going on.

Thus battling resident Célia Barros has compiled two specific petitions for both adults and the under-18s (who are not qualified to sign petitions for adults). She is hoping people concerned about attacks on the environment anywhere in Portugal will sign them – and that local schools might promote the petitions for the youngsters.

The petitions can be accessed here:

Adults, for the repair to the land (click here)

Teens, for the repair of the land (click here)

Says Célia Barros: “We need answers. And we need action. This is all looking very bad. What happened as we were all stuck at home in lockdown was unpardonable. The destruction went ahead at a time when birds were nesting. You could literally hear their cries as machines worked, destroying their young. It was heartbreaking.

“Yet now, months on, nothing has moved forwards as was promised, and we are still denied access to a footpath that has been in constant use for well over 30 years”.

The Resident will be attempting to get answers from the borough council, the ICNF and Lisfina next week, but in the meantime anyone wishing to sign the petitions can do so in the knowledge that they will be helping people deeply concerned about disappearing landscapes and habitats make their voices heard.