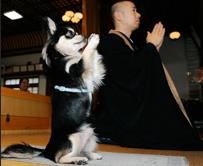 A PET dog of Zen Buddhist monks at a temple in southern Japan gets into position every morning just like his masters for daily prayers.

Conan the Chihuahua, who is one and a half years old, has become the talk of the town, and beyond, after he began joining his master before the altar.

He sits up on his hind legs next to priest Joei Yoshikuni and presses his paws together in front of his nose.

It is believed to have only taken the dog a few days to pick up the pose at Naha’s Shuri Kannondo temple.

His master said: “I think he saw me doing it all the time and got the idea to do it too”, adding that Conan generally goes through his prayer routine at the temple in the capital of Japan’s southern Okinawa state without being prompted before his morning and evening meals.

The priest is now trying to teach him how to “sit still while I meditate”, adding: “It’s not like we can make him cross his legs”.

The dog’s prayers have spread and the temple has been inundated with tourists.