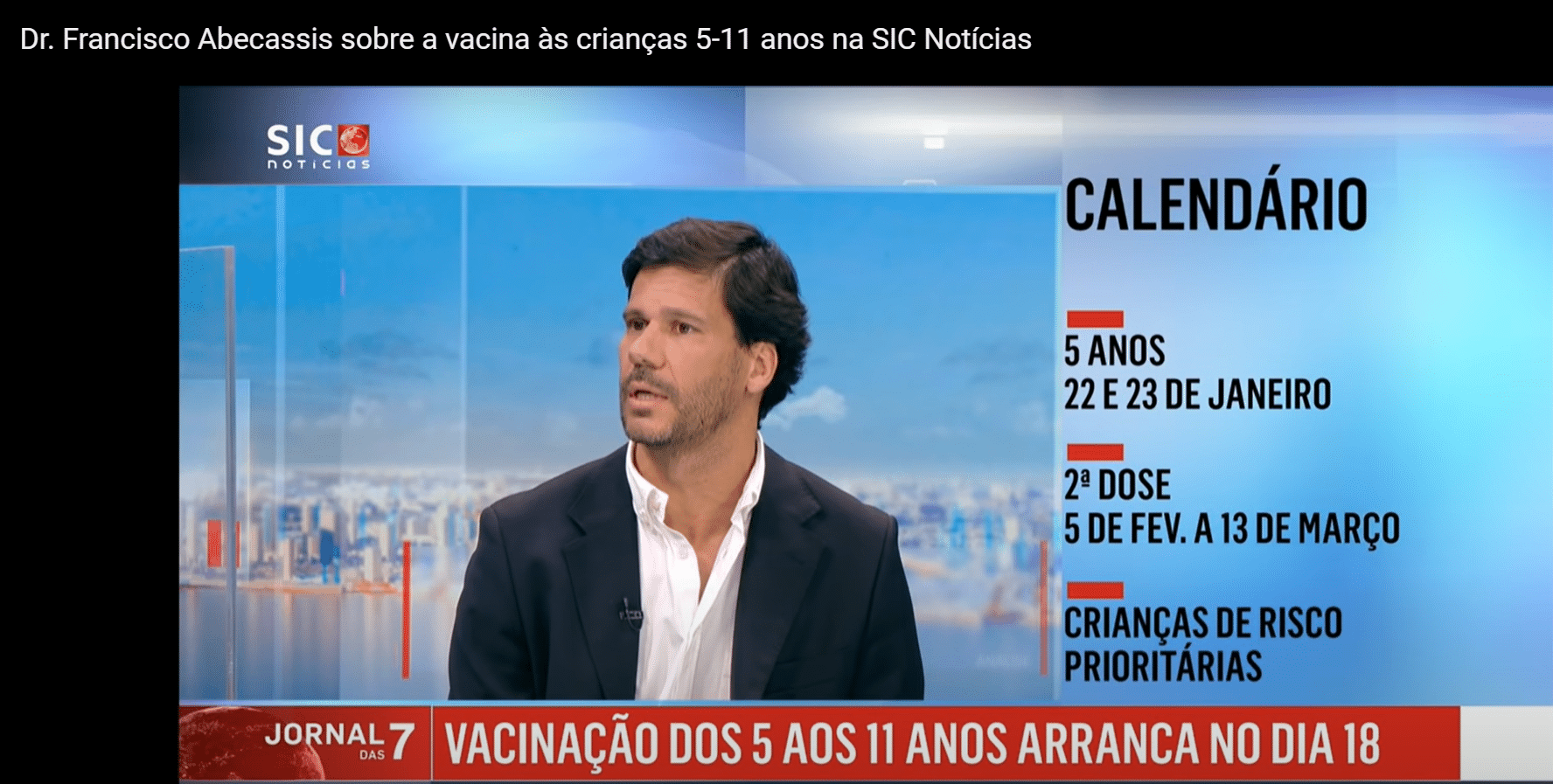 Pediatric intensive care specialist Dr Francisco Abecasis has refuted the notion that unvaccinated children do not face discrimination in Portugal.

Talking on SIC television news, he claims his own unvaccinated children (over the age of 12) are experiencing discrimination every single day at school.

Outlining the forms, Dr Abecasis also described why he believes parents should wait “a bit longer” before rushing to vaccinate healthy 5-11 year olds.

If the children are “without any ‘morbidities’ (chronic diseases), I would say there is no rush to get them vaccinated”, he told Jornal as 7.

Studies are “very new; there is not enough data” – but more importantly current vaccines being administered have been devised for a strain of the SARS-CoV-2 virus that is no longer predominant.

If it turns out that they have little effect against the Omicron mutation that IS becoming predominant, very quickly, then there is little point accepting the vaccine – particularly as the vast majority of children do not suffer from becoming infected.

“This is my opinion, obviously. If parents say they want to vaccinate their children, I will not go against this opinion”, Dr Abecasis continued.

But, the way he sees it, it might be safer for parents to wait until the data from mass-vaccinations in this age group elsewhere in the world is properly collated – which should be in “just one or two months time”.

At this point, the specialist referred to veiled political pressure on parents; how authorities have been at pains to say the final decision is with parents, and that they will not be obliged to vaccinate their children.

“This is not really true because children who are not vaccinated are subjected to measures (more prolonged confinements; requirement to take tests for sports) which vaccinated children are not. There is discrimination. It is already happening with adolescents.

“I have children of this age, who are not vaccinated, and my son had a class for one hour with a teacher who later tested positive (she is vaccinated) and had to spend 10-days at home, even though he tested negative – while his colleagues who were vaccinated were allowed back to school” (if they tested negative).

“He was healthy, he tested negative, he underwent various tests, but was shut up at home for 10 days because he was not vaccinated. If this isn’t discrimination, I don’t know what is”, said the doctor.

“My other son, in order to play basketball, has to take tests before every game while his vaccinated colleagues do not – this at a time when we already know that the vaccine does not preclude infection.

“Let’s imagine, a vaccinated pupils is positive, unvaccinated pupils are sent home… I think people can see this makes no sense. This is a way of obliging people… they are vaccinating their children not to protect them from a virus, but to avoid very restrictive policies that we are putting in place that deprive children of their liberty…”

For the record Dr Abecasis stressed that he is not in any way against vaccination. Himself, he is already triple-jabbed. He is simply against the ‘rush’ to get perfectly healthy children vaccinated against a virus that rarely affects them in any serious way, the full results of which on developing bodies are still not properly known.

In the last almost two years of pandemic, he told SIC that four children have been in intensive care in Portugal as a result of infection by SARS-CoV-2 – only one of which had been previously ‘healthy’.

The ‘worst effect in children’ of infection by the virus appears to be multi-systemic inflammatory disease (similar to Kawasaki Syndrome) and to date, said the doctor, there is no data to say whether or not the vaccine reduces the chance of this disease developing.

If this data comes – which it will – “this would be a good argument to vaccinate children”. But, right now, no-one knows.

Meantime the highly-infectious RSV (Respiratory syncytial virus) is not.

Indeed RSV is claiming more and more young victims who end up in intensive care, on ventilators and very seriously ill. “But no-one closes a school because of it”, says Dr Abecasis.

For a clip of Dr Abecasis’ interview see here.