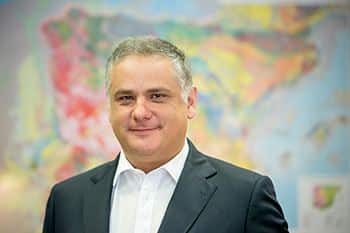 In serious bad odour with environmentalists at home, industry secretary Jorge Seguro Sanches is in Canada today ‘peddling lithium’ – the light, lilac-coloured mineral that lies in abundance underneath Portugal’s soil.

He is taking part in an international summit of ‘mines ministers’ bringing together 3,800 investors from 130 countries, say reports.

A study by American consultants Market Research estimated years ago that the lithium market by 2020 would be worth €31.5 billion – and Portugal is as a result sitting incredibly pretty.

Bizarrely, Seguro Sanches told Lusa that: “Our country does not have oil or natural gas (exploration)” therefore it is “much more easy to opt for renewable energies. This is very coherent. Renewable energies, electricity, lithium, the possibility of the existence of batteries. It is the best way to accumulate energy and electricity, through dams or lithium batteries”.

What the secretary of State actually meant is slightly confused.

Portugal’s lithium deposits are not ‘renewable’ as such. They have been ‘guestimated’ as having a lifetime of “another 70 years, at least”.

But as for the country “not having oil or natural gas (exploration)”, this is only due to the massive public opposition that has consistently delayed well-laid plans.

Needless to say, Seguro Sanches continued with his message to Lusa implying that Portugal had all the means and wherewithal to “create an industry in this sector”.

As one of our previous stories explained last year, up until now, Portugal has had to export lithium in its basest form as there are no ‘smelters’ here where it can be extracted from the rock in which it naturally exists (click here).

Says Lusa, Seguro Sanches wants to “attract investors for an international public tender which will be launched very soon” – almost certainly designed for the construction of a smelting works.

“This is an opportunity for the development in Portugal of an industrial sector connected to prospection, in the first phase, and then to extraction”, he said.

“As to the impact of this industry, it is still early to evaluate” as we are living in “an energy transition”, he added.

Seguro Sanches is the same secretary of state who recently waved through the extension of drilling contracts for oil and natural gas along the Algarve/ Alentejo coast.

This week, MALP – one of the first anti-oil groups to mobilise against the threat of hydrocarbon exploration – is demanding his resignation, saying he lied to the Portuguese people over his reasons for doing so.

Says MALP, Seguro Sanches cited the failure of two legal bids for embargoes which are in fact still in place.

“How can we trust a government that lies to the people?” is MALP’s principal concern – the second being why has prime minister António Costa taken over a week to fail to reply to the appeal from local mayors for an urgent meeting (click here)?

But as for lithium, Seguro Sanches hopes his fine words will attract at least one of the thousands of investors gathered today in Canada.