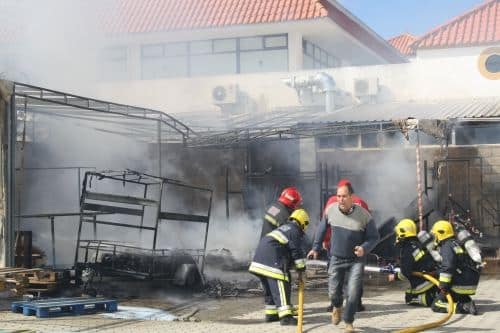 Despite various adversities the Algarve has been subjected to, the region has kept its head above water

With the busy summer season in its final weeks, it has been revealed that the overall Algarve occupancy rate for August reached 90.7%, representing a slight increase compared to the same period in 2011.

This despite the various economic issues to which the region has been subjected over recent months. Negative press reviews, increases in IVA rates, the implementation of tolls on the A22 and the resultant difficulties for those with non-Portuguese plated cars, the overcrowded EN125, and the general Euro crisis, the Algarve has kept its head above water.

As expected by the Algarve Hotels and Resorts Association (AHETA) president, Elidérico Viegas, August continues to be the region’s most tourist-attractive month, and saw substantial increases in Dutch (+17.3%), British (+16.1%), German (+15.7%) and Irish (+4.6%) visitors, when compared to August of last year.

However, there was a significant decrease in the number of Spanish visitors (-29.1%) and the Portuguese domestic market showed a reduction of 6.3% tourists in the southern area.

Although a miniscule increase in occupancy rate of 0.1% has been registered this year, compared to 2011, AHETA’s president believes that holidaymakers and vacationing families in particular are now taking advantage of all-inclusive holiday packages and accommodation that offers reduced prices. This has led to a year on year revenue decrease of 4.3% for the region.

Elidérico told the Algarve Resident: “Our post-summer forecasts pointed to occupancy rates registering the same as those of the previous year, although with lower revenues; a situation that turned out to be true. The breaks from the Portuguese and Spaniards were offset by increased demand from English, Dutch, German and Irish.”

He added: “The declines in domestic and Spanish markets are the natural consequence of the economic difficulties that the countries are going through, but also, and most especially, the austerity measures imposed on Portuguese families.

“Moreover, regardless of the economic crisis in Spain, we cannot dissociate the decline in demand in the Spanish market from the introduction of tolls on the Via do Infante. Until the implementation of this measure, we had recorded sustained climbs in Spanish visitors to the Algarve.”

Areas that experienced the largest increases in visitors, when compared to last year, are Lagos/ Sagres (+3.1%) and Vilamoura/ Quarteira / Quinta do Lago (+1.8%).

On the other hand, locations hardest hit by occupation decreases were Carvoeiro / Armação de Pêra (-5.3%) and Monte Gordo / Vila Real de Santo António (-1.4%), while Albufeira recorded the same occupation as in the previous year.

Shirley, from Shirley Dunne Villa Management, a well established villa holiday and property management company for the Algarve, said: “I would agree that occupation this summer has been quite good and our bookings have definitely gone up from last year, which is surprising when taking into consideration that the Queen’s Diamond Jubilee and the Olympics have taken place.”

“We noticed the biggest occupation increases in August, when arrivals were probably up by at least 5% from last year,” she concluded.

Looking at the fast-approaching low-season, Elidérico Viegas believes that “unfortunately, compared to the previous year, there will be more hotels and tourist enterprises to close down during the off-season, even despite the more inviting prices and deals that are being advertised.”

He also expects that at the end of September, the Algarve will record occupant rates similar to those of the same period in 2011. However, overall turnover for the region “will fall about 5%”.

Arrivals at Faro up 2%

In addition to successful occupation rates, in August a 2.2% growth, year on year, in commercial passengers arriving at Faro Airport was experienced.

A significant increase of over 15% in passenger traffic was noted from the German market, with an increase in the Irish market of nearly 5% and the Netherlands registering a 3% growth during August.

According to data, released by ANA Aeroportos, the low-cost airliner Ryanair transported 7.4% more passengers into Faro Airport this August compared with last year, whereas their competitors, easyJet, showed a 6.5% decrease in the number of people they brought to the Algarve.

Together, the two airlines carried over 4,600 passengers more to the Algarve region than in the corresponding month the previous year.