Hundreds of international travellers stuck in queues for hours

Hundreds if not thousands of airline passengers had their arrival in Lisbon airport today ‘ruined’ by SEF border agency’s insistence on holding what it called a ‘plenary session’ between the hours of 6-9am.

The result was utter chaos. Passengers coming in on international flights stacked up waiting to get through passport controls, in some cases for up to six hours.

How this can be allowed to happen in a ‘world class tourist destination’ is the question on everyone’s minds.

In his regular Sunday slot on SIC television this afternoon, journalist Nuno Rogeiro said SEF’s internal issues may be valid but for such total mismanagement to have been sanctioned, for any reason, is beyond belief.

Passengers themselves have shown their disgust by uploading photographs and videos over social media. 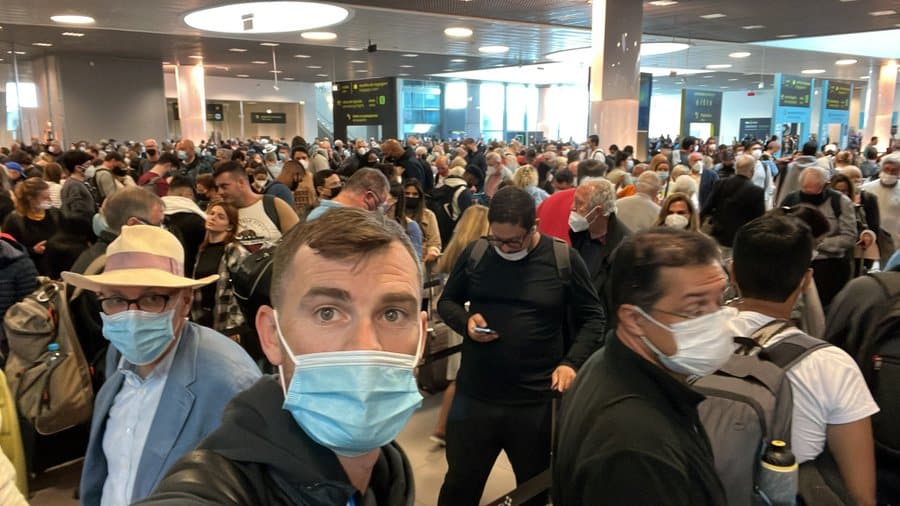 “It takes longer to get thru passport control at Lisbon airport than it does to fly here. #brexit”

SEF for its part “guaranteed that it complied at all times with minimum services under the terms of the law”, which if anything made the whole situation even worse.

True, ANA airports authority and the airlines concerned were warned of the plenary session, but there was nothing much they were able to do by way of mitigation: the session was timed for the moment Lisbon airport received its highest number of non-Schengen space air traffic – and the passengers affected paid for it.

Even at lunchtime queues were still stretching back for over an hour.

Tweeting to the British Consulate, one unhappy traveller wrote: “disgraceful scenes at Lisbon airport. Families waiting 6 hours to get through immigration. No food, no water.  Someone just passed out, no medics”, while another remarked on the “0/10 for @visitportugal”.

Indeed the reports of people passing out have peppered today’s news, and while British travellers blamed the whole thing on Brexit, others from destinations like Canada and Brazil blamed their ordeal fairly and squarely on Portuguese authorities – one being quoted as saying if he knew arriving in Portugal “was going to be like this”, he would have chosen a different place for his holidays.