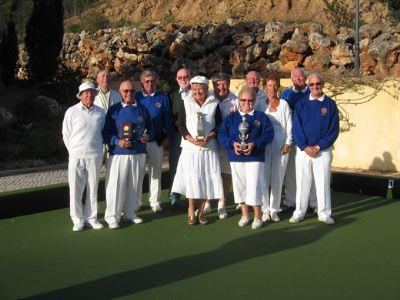 After an interesting and competitive series of rounds, Saturday March 28 saw the finals day at Parque da Floresta Bowling Club.

A difficult, gusty wind made for challenging conditions but the sun shone and the finalists put on an excellent display.

The championship singles was won by John Woodworth, who beat Max Hodges by 21-15. Both finalists had a busy day, each being in three finals.

In the ladies singles, Helen Stokes narrowly defeated Jean Palmer-Hall by 21-16 after a tense and close encounter in which Helen had been 17-3 ahead at one stage.

The pairs final was between John Woodworth and Peter Smith and Ken Catherall and Ron Nutter. Ron and Ken won by 20-11 and are to be congratulated, having now won the title three years in succession. In the triples, George Humphries, Gerald Clough and Ed Keighley played Cath and George Wood and Max Hodges, the latter trio eventually triumphed by 18-10.

The two wood final saw the ubiquitous Max Hodges take on George Humphries and Max won a close match by 10-7.

Finally, the married pairs (a new and popular competition this year) was between Cath and George Wood and John and Verna Woodworth. Cath and George winning a very tight game on the last end by 19-16. Janice Clarke presented the trophies to all finalists who were all complimented on the high standard of bowls under difficult conditions. The club goes from strength to strength and the excellent new carpet, recently laid, has undoubtedly made a tremendous difference to playing conditions.

Everyone now looks forward to next season and new challenges on the green.