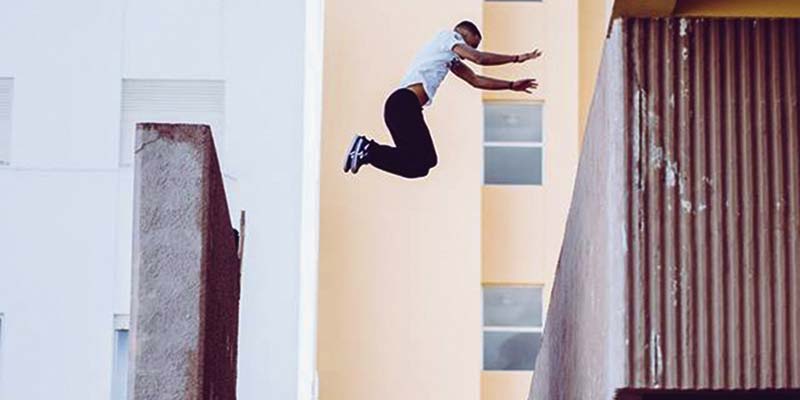 Whilst interviewing Lucas Perico Phelan for my May article about his synesthesia, he told me about his love of parkour and I thought I must find out more about this activity which I had perceived to be mad young lads doing dangerous things like jumping off buildings. Well, it is and it isn’t!

Parkour is seen as an art form, a philosophy or a sport. It is fitness training that tests an individual’s strength and flexibility whilst they aim to get from one place to another through an environment, usually urban, in the fastest and most efficient way possible, without the aid of equipment, by vaulting, running, rolling, jumping and climbing. Several terms are attributed to this type of training with Parkour, the Art of Movement and Freerunning being the most popular.

Now practised worldwide and incorporated into some army and navy training programmes, parkour originated in France, in the late 1980s, developed by Raymond Belle and his son David. It is named from ‘parcours du combattant’ (obstacle course) and the moves derived from ‘la méthode naturelle’ training methods developed by Georges Hébert before World War I.

Initially called ‘parcours’, David Belle renamed it ‘parkour’ and a male practitioner became known as a ‘traceur’, a female a ‘traceuse’.

Belle’s group were known as the Yamakasi and, before long, other groups formed. However, reports of deaths and injuries attributed to parkour began to appear in the news and it was for a while misjudged and seen as a dangerous craze rather than the popular art form/sport it has become today.

Parkour sequences were first seen in the 1998 film “Taxi 2” and are now used in films, adverts and video games. However, it was through the 2003 documentary “Jump London”, followed by “Jump Britain” in 2005, that a new generation of traceurs was inspired almost overnight.

Lucas was 14 when his step-uncle introduced him to parkour in 2014 and it literally changed Lucas’ life by allowing him an escape from his teenager stresses and everyday issues. He tries to do a bit every day but does not have a specific training programme, mostly working alone as he prefers the self-discipline and challenges he sets himself, although he also trains with a close group of friends.

Lucas told me: “Even when I walk home from school, I cannot resist doing some moves along walls, benches, railings etc. I automatically look around my environment to see how I can move within it and look for the movement possibilities that are everywhere. This scanning of the environment is referred to as PK vision.”

When he is performing, Lucas is at his happiest. “I feel formless and free. The rest of the world ceases to exist, and I am at peace in the world that I am jumping into. I am living just in the movement and in the moment. For me parkour is like meditation.”

No equipment is used in parkour with practitioners wearing non-restrictive light clothes. Lucas used to wear gloves and stronger shoes but found they interfered with his grip and, more importantly, his being able to feel the textures of the obstacles he uses, so he often likes to go barefoot as this allows for greater balance and sensitivity. As David Belle said, “bare feet are the best shoes”!

There are no set rules, guidelines or official lists of parkour ‘moves’, although there are fundamental basic ones such as vaulting over obstacles, rolling to help absorb impact from high drops, precision jumping and landing accurately with the feet on narrow obstacles.

Watching Lucas’ YouTube videos is fascinating, especially as he has filmed himself so that the viewer experiences parkour from his perspective as he moves around Portimão doing natural fluid movements. The films are mesmerising to watch and force the viewer to see the environment in a whole new way.

Traceurs’ mental and physical training requires them to be highly dedicated and skilled and they must rehearse each movement multiple times until it can be performed easily. By eliminating the use of equipment and its possible failure, traceurs rely on their hands and feet and their ability to control their bodies to interact safely with the environment. I asked Lucas if he ever feels scared before tackling a high or complicated jump. “Yes of course, but it is the fear that keeps me alive as I respect the move I have to make and I know my limitations! However, I have had a few sprains and broken toes!”

Due to the concern of trespassing, damage to properties and the dangers to traceurs from performing on walls, buildings, abandoned structures, etc., some cities are creating designated parkour areas. Traceurs, however, are generally against working in dedicated spaces because it goes against the parkour values of creativity, adaptation and freedom. Parkour organisations, therefore, promote a ‘Leave No Trace’ initiative to encourage traceurs to work safely and with respect for the environment.

Lucas hopes to take part in parkour competitions especially since it was added to the list of disciplines of the International Gymnastics Federation (FIG) in 2017 with the FIG Parkour World Cup being launched in 2018. The first world championships are planned for 2020.

Often traceurs get together for a ‘jam’ and may train for hours or even days with people coming together from different cities. The 4th annual Monchique Parkour Retreat took place last month bringing together traceurs from all over Portugal to focus on the importance of ‘movement for longevity’.

Lucas wants to use his skills for stunt work and to train as a parkour teacher. He particularly wants to help youngsters to use parkour’s disciple and philosophies that heal the mind and body to overcome any mental health issues they have, to help them find the freedom and happiness that parkour brought him. Lucas is also writing a book of his “commandments for life” (such as focus, be creative, never give up…) to inspire his young step-brother and others on how to conduct themselves in the world.

The traceurs’ motto is “Be strong to be useful”, meant for themselves and for them to use their skills to help their community.

I loved Lucas’s enthusiasm and his positive outlook on life. He wisely told me to “concentrate on import things and focus on enjoying the moment”.

I think Lucas will fulfill his dreams and be a great inspiration for others.
So now you know!