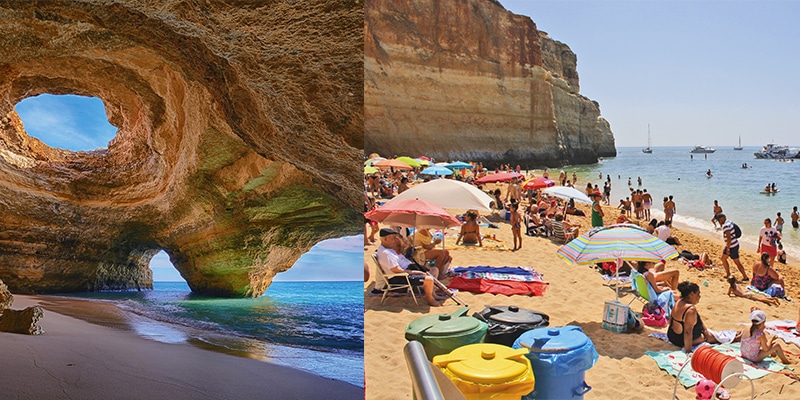 It has become one of the most popular tourist attractions in the Algarve, but at what cost? Locals believe that Benagil, a tiny beach in Lagoa famous for its stunning sea cave, is at its “breaking point” due to an overwhelming number of visitors. Illegal motorhoming, public defecation and a blatant disrespect for the rules, which sees people parking where they please and swimmers turning a deaf ear to lifeguard warnings, have seen the once tranquil beach start to lose its charm.

“Benagil isn’t equipped to deal with so many people. It has gone viral,” says António Franco, manager of local restaurant O Litoral.

This is no exaggeration. Benagil’s sea cave has been featured over the years in countless lists from reputable international publications, being named one of the world’s best natural wonders by the UK’s The Guardian and one of the 50 most beautiful places in the world by Condé Naste Traveler magazine.

Benagil has also become a social media sensation. Maline Oltmann and Marcus Belizaire, a young German couple on holiday in Portugal, told us as they arrived at the beach that they discovered Benagil after seeing a picture “on Instagram” and decided to see it for themselves.

Pauline J, a 60-year-old from the UK visiting the Algarve with her husband for the fourth time, found out about Benagil on Facebook in one of the many lists that rank it as a “must-see” attraction.

For these tourists, the beach is every bit as beautiful as they expected and the prospect of seeing the sea cave is exciting.

But for the people who are in Benagil living or working every day, the case is different.

António Franco believes that the area is starting to show strong signs of ‘wear and tear’ and that this uncontrolled wave of visitors has already taken its toll on the image of the area, which was once one of the best kept secrets in the Algarve.

Says Franco, the roads are simply not big enough to handle so much traffic and the car park at the top of the hill, filled to the brim almost every day during the summer, is insufficient for so many cars.

Another local business owner, who asked to remain anonymous, says the current situation is “awful”.

“We’re victims of disorderly tourism. Tourists come here and do not respect anybody.”

Some people have even been spotted sleeping in their cars after enjoying a trip to the beach or dinner at a local restaurant, and motorhomers set up camp in spots where they are not allowed to.

Both business owners complain that tourists simply walk into their establishments to use their toilets without asking.

“I’ve had to start charging a fee. Many people don’t understand why and get angry,” Franco told us.

Open defecation had also become an issue in the area, with people defecating behind bushes on the cliffs and near the beach’s car park.

The Resident visited the site on Monday and saw toilet paper and human faeces scattered across a large area near the car park.

However, at the time of going to press on Wednesday and following a hard-hitting post on social media by a local resident showing photos of the littered site and busy car park – and shared over 200 times -, we were informed that two portaloos were due to be installed at the car park – likely a result of the dozens of negative comments that the post received.

Another cause of concern is safety at sea as swimmers, canoeists, stand up paddlers and boats all share the water at Benagil in their attempt to reach the sea cave on the eastern cliff. So say João Simões and Alcides Sousa, two of the beach’s lifeguards.

“We’re always on the watch to ensure safe distances are kept between them,” Simões told us.

But doing so can be tricky when they also have to alert people that swimming to the nearby sea cave is “dangerous” and strongly discouraged.

“We have a colleague in the water during the most critical hours to make sure that people are safe,” he said.

He lamented, however, that tour operators and other tourism representatives try to “falsely advertise” what you can do at the beach.

“They give wrong information to tourists. Many people get here and say that they were told it is completely fine to swim to the cave.”

Bruno Valente from Blue Xperiences, a local stand up paddle company, says that most people who come to Benagil want to visit the sea cave and that tourism in the area has ‘exploded’ in the last few years.

“Around eight years ago when sand replenishment works were carried out at the beach, you could even walk to the cave. But that is not the case anymore,” he told us.

Ruben Costa from Taruga Benagil Tours also confirms the tourism boom, saying that his company has registered a 20-30% increase in clients between 2013 and 2018.

Motorhome park suggested
During our visit to Benagil, we were told by a local business owner that there had been a project to build a motorhome park in the area to help deal with the huge number of motorhomers who illegally park overnight in Benagil, but that the project had been rejected by the local council.

The Resident contacted the Algarve’s regional development commission (CCDR) which confirmed that the project does exist and was even welcomed by the CCDR.

The commission’s spokesperson Carlos Cruz told us that the project is in line with the region’s strategy for the motorhoming sector, but that the owner of the land would have to contact the Portuguese Environmental Agency (APA) as the land is located in an area under the jurisdiction of the POOC coastal plan.

The Resident contacted Lagoa council to confirm whether the project had indeed been rejected, but we did not receive a response at the time of going to press.

Meantime, Algarve tourism boss João Fernandes told us that the regional tourism board (RTA) is “in contact” with the local council in a bid to find solutions for these pressing issues.

Possible solutions, says Fernandes, include identifying areas where a motorhome park could be created or, otherwise, setting up physical barriers to prevent motorhomers from parking in locations that are ‘off limits’.

Illegal motorhoming – council has “power to act”
A lawyer has explained to the Resident that the local council has authority to “establish where and how” motorhomers can park by defining what it views as motorhoming. Through these regulations, the council can “restrict and control” these vehicles.

The council “can also prevent the parking of motorhomers by installing traffic signs that prohibit these vehicles from parking in those spots for a long period of time”.

The lawyer also says that the POOC (coastal plan) can define areas that are “off limits” for motorhomers.

However, this will all have to be complemented by tighter control from authorities.