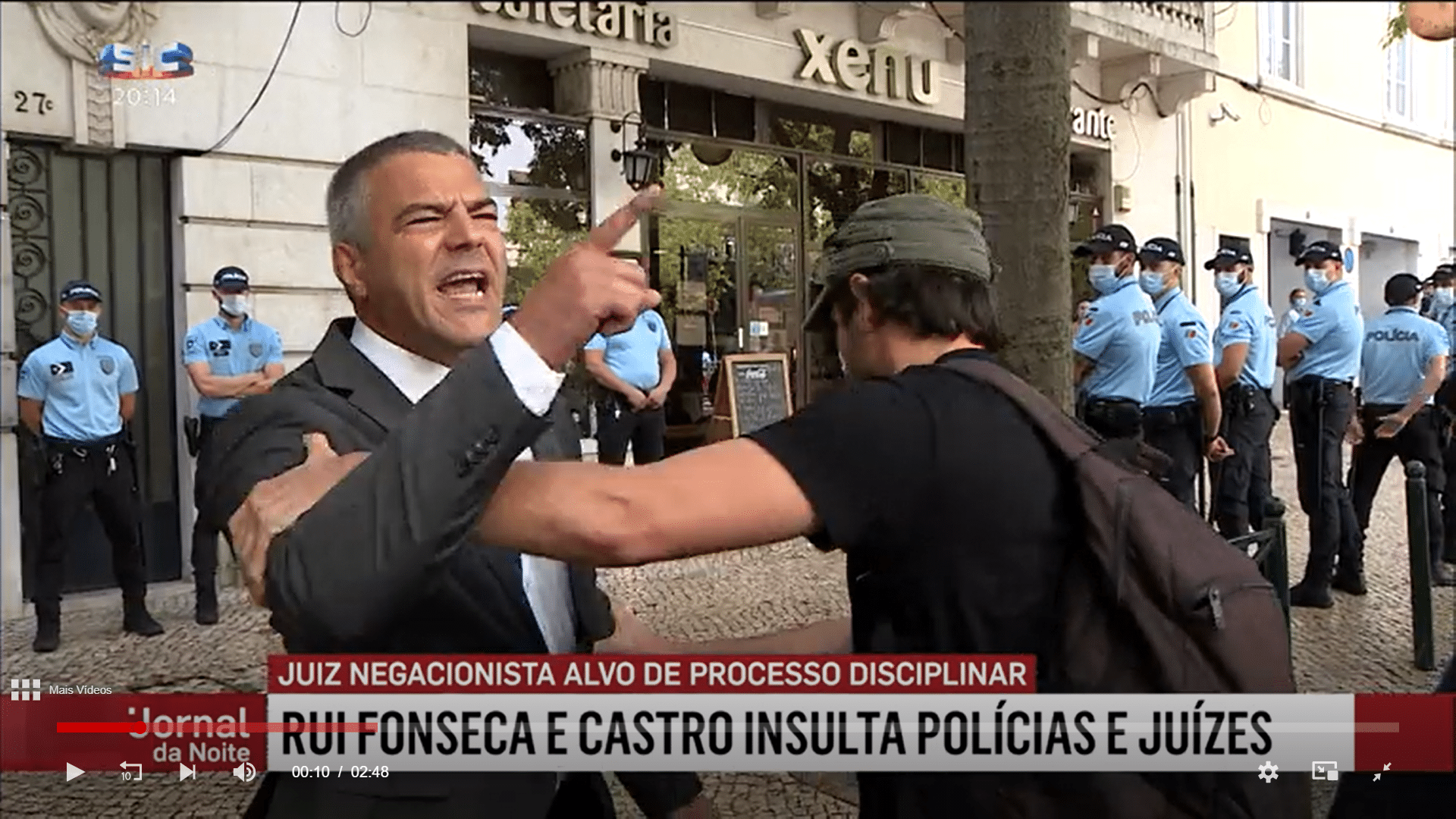 Yesterday was the day that ‘pandemic negationist’ judge Rui Fonseca e Castro faced his regulatory authority after months of suspension over his very public views on authorities’ approach to Covid-19 (click here).

Supported by a throng of people kept behind a metal barricade, he arrived at the Superior Council of Magistrature (CSM) for what was described as the “last opportunity” before a decision is taken on the disciplinary process against him.

The inspector leading the process is understood to be recommending expulsion from the magistrature, which, says SIC television, “is the strongest sanction the regulatory authority can apply”.

But there was no indication yesterday that Mr Fonseca e Castro was prepared to give an inch.

He reacted instantly a PSP agent asked him to put on a mask (due to his proximity to his supporters, all of whom were maskless as well), and then followed a bizarre on-camera exchange in which he accused the police of being about to ‘charge on the people’ – something that had not been in the least bit clear from the agents’ demeanor.

All one could say truthfully is that there were an unusually large number of police in evidence yesterday given the situation.

Mr Fonseca e Castro’s approach however deteriorated to the point that he told agents that they were beneath him; he was “above them” (in his capacity as a magistrate, albeit suspended…) He told them to ‘stay in their place… you are below me… you are not going to fire on anyone…”

It was an altogether overly-dramatic pre-scene to the ‘main performance’ inside the building, where he told the assembled magistrates that the disciplinary proceedings against him were “a case of being silenced.

“I am not here to allow pedophiles to go free, which is what your excellencies do normally. I am here to raise my voice…” he told the chamber.

The hearing lasted an hour – and, according to SIC, saw Mr Fonseca e Castro reiterate his ‘negationist’ stance – even accusing members of the magistrature considering his case as belonging to secret societies.

This one of them refuted, as an “insult”.

Mr Fonseca e Castro emerged from the hearing labelled a ‘hero’ by his supporters while the recordings of his interaction with police pretty much said it all.

Says SIC, PSP police have not yet decided whether they will institute criminal proceedings over Mr Fonseca e Castro’s insults. This disciplinary hearing isn’t the only one lined up against him. There is the possibility of another, due to accusations made over social media (click here).

Today, the syndical association of Portuguese judges (ASJP) has criticised their colleague’s behaviour, admitting that they found it “strange”, and repudiating what they described as his “overt and gratuitous defiance of forces of authority”.

Mr Fonseca e Castro’s behaviour “does not conform with the principles stated in the ethical commitment of Portuguese judges, nor does it contribute to citizens’ trust in justice”, they said in a statement.

Update: “PSP advances with criminal complaint against negationist judge”, writes Expresso, adding that the police force is also going to identify the people who took part in the demonstration outside the Superior Council of Magistrates so that they can be charged with failure to comply with public health regulations.

According to the PSP, Mr Fonseca e Castro’s “apparent objective” in insulting them was to provoke. Agents however “maintained a professional stance, calm and serene, mindful of their mission”.