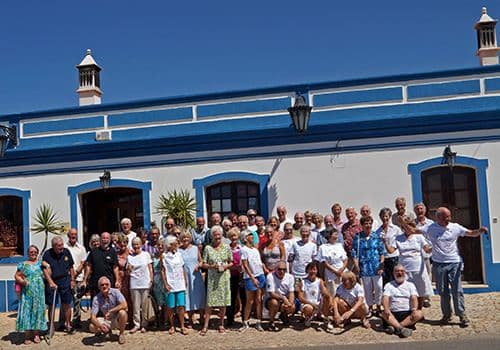 An initiative to remove palm trees in the coastal town of Carvoeiro created an unusual attraction in the town after a machine that was attempting to remove one of the trees broke down leaving it at a precarious 45 degree angle outside a local bar.

Dubbed the “leaning palm of Carvoeiro” by local bar owner Robert Wilkinson, the tree had been due to be removed as part of a programme to remove all the palms in the town as a means to control the Red Palm Weevil which has been killing the trees.

Carvoeiro Junta (Parish Council) President, Jorge Pardal, said: “All the palm trees in Carvoeiro will be cut down as although it is possible to treat infected palms, it is very costly so we have decided the best plan of action is to remove them all to stop the spread of the weevil further.”

He added: “The trees that are removed will be replaced by other indigenous species of trees with broad leaves that will be able to provide shade throughout the town.”

Works to remove the large palm trees outside Smilers Bar on the Rua do Farol on Monday, April 4, came to a halt after the machine used in the action broke.

At the time of going to press on Wednesday, the leaning palm tree had yet to be removed.

Robert Wilkinson of Smilers Bar said: “We have had to clear some tables and chairs away from the area but the palm has become somewhat of an attraction with tourists coming up to have their photograph taken with the leaning palm of Carvoeiro.”

While the Junta has decided to remove all palm trees in the town to combat the problem of the Red Palm Weevil, Algarve MP Mendes Bota is continuing to draft his own resolution to try to address what he has described as the “plague which is killing palm trees across the country”.

After a letter about the Red Palm Weevil sent to the Government by Mendes Bota remained unanswered, he is now working on a strategic plan to control and eliminate the weevil on a national level while working to prevent future infestations.

Mendes Bota said: “The control of the trees is now urgent while we must follow the rules set out by the European Union about this specific problem, which up until now have been ignored by the government.”